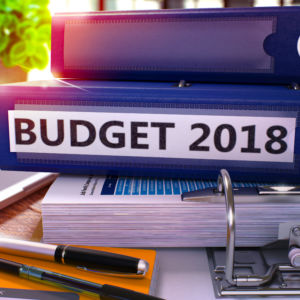 The Iowa Legislature will have to contend with a now $34.7 million shortfall in the fiscal year 2018 budget (previous estimates had the shortfall at approximately $37 million). With her Condition of the State Address this week, Reynolds’ Department of Management also released her recommendations to overcome the deficit for the remainder of fiscal year 2018, as well as proposed a fiscal year 2019 budget plan.

According to the fiscal 2018 budget, the Reynolds administration is recommending a total of $27 million in cuts to current fiscal year 2018 appropriations. These include $1.8 million from community colleges, approximately $5.1 million from the Board of Regents, approximately $3.3 million from the Department of Human Services, and $10 million to the Department of Human Services Medical Assistance. Reynolds also recommended a $1.6 million cut to the judicial branch.

Although the administration has recommended $27 million in cuts, Director of the Department of Management Dave Roederer said that the state will only need $19.4 million in adjustments for the remainder of the year to cover the shortfall. According to the the Department of Management, Reynolds’ budget fixes for the current year also involves using a windfall of $11.2 million from federal tax reform to fill a hole. The Department also said that it anticipates a Medicaid adjustment of $10 million for the remainder of the year that will benefit the state. In total, Roederer said that the ending balance of fiscal year 2018 will be $3.6 million.

As to Reynolds’ recommendations for 2019, the Department of Management anticipates $175.3 million in additional spendable revenue from a budget with an expenditure limit of $7.557 billion. In total, the Reynolds Administration seeks an increase in spending by $173.6 million. Fiscal year 2019 revenue is anticipated to see a 2.4 percent increase.

The largest of these increases is $54 million in supplemental aid to Iowa public K-12 funding, a 1.5 percent increase in total funding. Last year, the legislature approved a 1.1 percent increase in supplemental funding ($40 million). The Reynolds’ budget also allocates $8 million to reforming education within the state, as well as a proposal to allow schools to spend $35 million (initially allocated at keeping class sizes down) on other school expenses. Roederer said that in 2019, the funding for the initiative to keep class sizes small would expire. Roederer said that the schools were already anticipated to receive the funding, but Reynolds is recommending that schools be able to apply that money to different expenses.

In Reynolds’ budget, the Board of Regents will see an additional $13 million, with community colleges receiving $3 million. Reynolds also allocated $14 million in funding to the state judiciary.

The Administration has also accounted for a possible water quality bill to be passed. Roederer said that the budget has $3.9 million allocated for water quality funding, based on a Senate draft of legislation. Roederer said that a new line item in the budget is $250,000 funding a partnership between Des Moines University and the National Alliance on Mental Illness (NAMI).

As to whether or not the 2019 budget takes into account the possibility of having to fund the Children’s Health Insurance Program (CHIP) if the federal government cannot come to a deal regarding appropriations to the program, Roederer said that the fiscal year 2019 budget does not. According to the Kaiser Family Foundation, in fiscal year 2016, the federal government contributed approximately $132 million to Iowa’s CHIP program, for a total of approximately $144 million. According to the Kaiser Family Foundation, Iowa, as well as 21 other states including D.C., will exhaust funding for the program between February and March of this year.