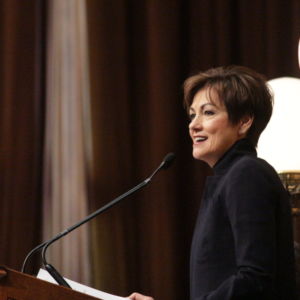 Leading up to her first Condition of the State Address as the 43rd Governor of Iowa, Governor Kim Reynolds hinted her administration would make tax reform a priority in the 2018 legislative session.

Reynolds’ most concrete proposal for reform from her state address on Tuesday was for the elimination of Iowa’s federal deductibility, which currently allows Iowans to deduct federal taxes on their incomes from their state income tax. Iowa is one of three states including Alabama and Louisiana to offer full federal deductibility.

“Because of an outdated provision in Iowa’s tax code, Iowans will see a tax increase if we don’t pass tax reform at the state level,” Reynolds said. “Iowa is one of only three states that allow taxpayers to deduct their federal taxes. While that might sound like a good thing, right now it’s not.”

According to the Iowa Department of Revenue, because the federal Tax Cuts and Jobs Act lowers federal tax rates, Iowans’ tax liability to the state increases because of a decrease in the federal deduction, meaning Iowans are anticipated to owe more to the state in the upcoming tax year, though a state rate change hasn’t occurred.

Reynolds announced that tax reform would be a multi-year effort in addressing both the state’s income and corporate tax rates, and said she intends to create a bipartisan tax force to evaluate the efficacy of “every” tax credit and make the appropriate recommendations based on those results.

According to the Iowa Department of Management, the first priority for state tax reform is reducing the state’s income tax, though no definitive timeline is set. Leaders from both the Republican-controlled House and Senate have agreed with the administration on that point. Addressing the corporate tax code will be at a later date because of unknown anticipated behaviors.

Previously, the Iowa Department of Revenue said that the complete impact of federal tax reform on behaviors and spending decisions for individuals won’t be realized until fiscal year 2019. At it’s first meeting of 2018, the Department of Revenue told the Revenue Estimating Conference that it had no readily available data on corporate tax reform impacts.

According to David Roederer, Director of the Department of Management, the state anticipates that after federal deductibility, Iowa will see an increase in taxes paid to the amount of $11.2 million in fiscal year 2018. Roederer said that the extra revenue will aid in helping the state overcome a now $34.7 million shortfall in the fiscal year 2018 budget (previous reports had that amount at approximately $37 million).

According to the Department of Management, Iowa’s increased revenue from federal deductibility in fiscal year 2019 will be $109.7 million. This brings the total available revenue for fiscal year 2019 to $285 million (after paying back $33 million and $55.5 million borrowed money from reserve accounts).

Though the Department of Management was adamant about receiving the $11.2 million in additional revenue to use in fiscal year 2018, Roederer said that because there are unknowns regarding the true impact of federal tax reform, and the possibility of state tax reform on the horizon, the state can’t spend that $109.7 million next year. However, Roederer said that since the state needs to prepare a budget for fiscal year 2019, the money needs to be accounted for in the event that state tax reform isn’t passed and the federal reforms produce those results.