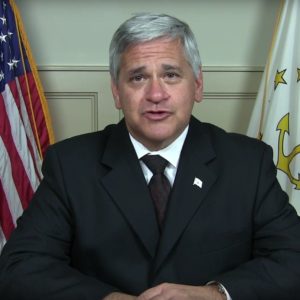 Environmentalists were dealt a stinging blow last week when a California judge dismissed lawsuits by San Francisco and Oakland against five major oil companies. Today, a new front in the fight opened up as Rhode Island Attorney General Peter F. Kilmartin filed suit in state court against 21 oil companies he alleges knowingly contributed to global warming, “causing catastrophic consequences to RI, our economy, our communities, our residents, and our ecosystems,” as he described in a tweet Monday afternoon.

“The defendants’ actions for the past several decades are already having and will continue to have a significant and detrimental impact on our infrastructure, economy, public health, and our ecosystems, and will force the State to divert already-limited resources to mitigate the effects of climate change, thereby diminishing resources for other vital programs and services,” Kilmartin said in a statement.

According to Kilmartin, Rhode Island is particularly vulnerable to the effects of global warming because of its 400 miles of shoreline, historic communities, and longstanding marine and fishing industries. The lawsuit argues that defendants “have known for nearly 50 years” about the impacts of fossil fuel use on sea levels and climate, but “sought to undermine public support for greenhouse gas regulation, and engaged in massive campaigns to promote the ever-increasing use of their products at ever greater volumes.”

“For a very long time, there has been this perception that ‘Big Oil’ was too big to take on, but here we are – the smallest state – taking on some of the biggest corporate polluters in the world,” he added. “The defendants have contributed greatly to the increased costs associated with climate change, and as such, should be held legally responsible for those damages.”

The lawsuit targets 25 energy companies, including ExxonMobil, BP, and Shell, and is strongly supported by Rhode Island’s governor and members of its congressional delegation. It is the first time a state, rather than a city, has sued for harms related to global warming.

“Rhode Island is more vulnerable to the effects of climate change than nearly any other state. The climate is changing and we need to take action now for the long term. In recent years, Rhode Island has made great strides and we’re standing up together against the Trump Administration’s actions that threaten our ocean, our Bay, our forests and our open space,” said Governor Gina Raimondo (D), who stressed the need to build more resilient infrastructure and the state’s support for offshore wind.

“Working families shouldn’t have to pay for the willful ignorance of big oil, big gas and big coal companies. I applaud Attorney General Kilmartin for taking action against oil companies. My team has worked closely with his from the start, and I pledge to offer any and all assistance necessary to make those responsible for climate change pay,” she continued.

The lawsuit has been praised by environmentalists and criticized by many of the groups standing against the Oakland, San Francisco, and Boulder lawsuits. They argue that targeting energy companies for global warming harms is an illegal attempt to pass national environmental policy through the courts, a change which would increase costs for business.

“It’s unsurprising Rhode Island is joining other states in these nonsensical lawsuits as they are in desperate need of money to keep their economy afloat. Rather than idle threats, Rhode Island should do everything in its power to make it an attractive state to open a business,” said Daniel Turner, executive director of Power The Future, a group which strives to present positive energy stories.

Turner said that he was skeptical the lawsuits would be able to help the environment, but that they were likely to raise the cost of business and potentially threaten the state’s ability to keep houses heated and lit. Manufacturing groups shared his sentiment.

She continued: “It’s time for politicians and trial lawyers to put an end to this frivolous litigation. Taxpayer resources should not be used for baseless lawsuits that are designed to enrich trial lawyers and grab headlines for politicians. This abuse of our legal system does nothing to advance meaningful solutions, which manufacturers are focused on every day.”