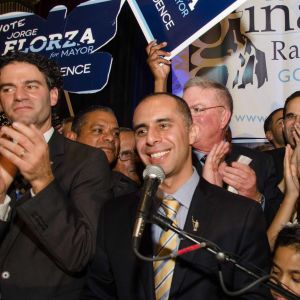 PROVIDENCE, R.I. — Providence City Hall, at the center of downtown in Rhode Island’s state capital, has been the workplace of 28 mayors since its completion in 1878.

A grand granite structure with sea green trim on its roof, the place is prime real estate in the shadow of the “Superman Building” — another iconic local landmark known for resembling the Daily Planet tower where Clark Kent works his newspaper gig.

Architecturally, city hall appears much the same as it did in the 19th century. Its recent inhabitants, on the other hand, are a testament to transformation.

After more than a century of WASP, Irish and Italian leaders, Providence elected its first Latino mayor, Democrat Angel Taveras, in 2010. It was a historic moment, hastened by decades of Hispanic population growth in Rhode Island — the capital’s Latino population hit 38 percent that year — and savvy political organizing. Experts say Hispanics succeeded in part by unifying diverse factions of their community together, bringing “pan-Latino identity” to the polls.

However it happened, Taveras’ victory began a new era for Providence and Rhode Island, which now has “the 12th largest Hispanic statewide population share nationally,” according to Pew Research. More than five years later, a second Hispanic mayor is firmly ensconced at city hall, and the capital has passed a mini-milestone: its first half decade with Latinos in charge.

“Being the first, you realize that you’re opening doors and that people are looking at you to see how you do,” Taveras told a Brown University conference on Latinos in politics in November 2013.

Thanks to him, there may be a bit less special scrutiny for his successor, fellow Democrat Jorge Elorza, who was elected in 2014 when Taveras ran for governor unsuccessfully.

“I don’t consider myself the Latino mayor or the mayor of Latinos,” Elorza told InsideSources in an interview Monday. At the same time, he pledged to continue pushing for policies to support Hispanics, including driver’s licenses for immigrants who came to America illegally.

“That’s a very concrete policy priority that comes out of the Latino and immigrant community,” he said.

The Latino community has also produced other elected officials since Taveras. The city of Central Falls, for example, chose its own Hispanic mayor to assume office at the ripe old age of 27.

In and around the state’s urban core, Latinos in politics could be the new normal. It’s certainly a case study in how America’s changing complexion can remake the face of politics.

“What is happening in Rhode Island is the foretaste of the Hispanicization of the United States,” Providence College political science professor Tony Affigne said during his remarks at the Brown conference.

Those words carry weight, too, as Affigne has spent decades advancing Hispanic political interests in the state, including by helping to lead the Rhode Island Latino Political Action Committee.

Founded in 1998, the PAC is perhaps most responsible for “the Rising Latino Tide,” in the words of Rhode Island Monthly. In fact, Pablo Rodriguez, a mover and shaker who was the PAC’s first president, argues that this kind of activism is much more vital to the cause than winning individual elections.

“We are the most important Latino political actors in Rhode Island, not the elected officials,” he told fellow activists, including Affigne, when his turn came at Brown.

Of course, elected officials are important, as Rodriguez admitted readily. The winning formula, per Rhode Island Monthly, has typically included “Ivy League educations, professional credentials and an up-from-the-bootstraps backstory.” Taveras spoke frequently of his journey from “Head Start to Harvard.”

Elorza is also a Harvard graduate with humble beginnings. He grew up in poverty as the son of immigrant factory workers, and that experience clearly colored his view of what America should provide for those who are struggling.

“This idea of the ‘working poor’ — that you can work and work and work but still you’re only treading water and not moving forward — that’s not who we are as a country,” he said.

Like many Democrats and some Republicans, the mayor would also like to see “comprehensive immigration reform” out of Washington. However, he said, “Part of the challenge is that on the right the discussion is so stuck on building walls and deporting folks that it’s really keeping us from having a sensible conversation on what we can do.”

Elorza argued that we must “rid ourselves of this fantasy that we can forcibly deport or that folks will voluntarily deport at the size and scale that would be required.” Asked about the morality of immigrating to a country illegally, he stopped short of saying it’s wrong.

“I don’t advocate for fully free borders,” he said. “I know that there are security issues. … I get the fact that there has to be a certain level of border control.” But the mayor pivoted quickly to say immigrants of various statuses need to feel comfortable reporting crimes and avoid being victimized.

According to Elorza, Latinos have lately felt victimized by Republican presidential front-runner Donald Trump, who described people Mexico was sending to America as “rapists” bringing drugs and crime. Trump has also drawn a hard line on deportations, even pledging to have a “deportation force” rounding up immigrants.

“Judging him only by the comments that he’s made publicly,” Elorza said, “there have been racist comments, xenophobic comments, chauvinistic comments, just across the board. That doesn’t appeal to who we are as a country.”

The mayor has many thoughts on who we are as a country — or at least who we should be. That includes a nation that celebrates diversity, where children are encouraged and not shamed for speaking multiple languages. He thinks it’s how they get ahead in this interconnected world, and Providence’s second Latino mayor plans to keep making his case.

Taveras didn’t run for a second term, but Elorza told InsideSources he definitely will.