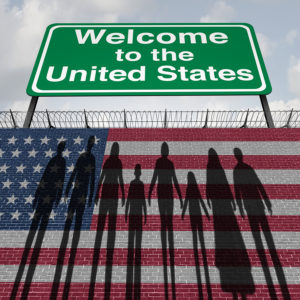 MAGA World, be warned: “Illegal: How America’s Lawless Immigration Regime Threatens Us All” is not for you.

The slim volume, written by Syracuse University’s Elizabeth F. Cohen, does not explore how Washington elites allowed hordes of “illegals” to infest the nation. It’s a history of what was once a broadly welcoming posture toward newcomers, combined with a frequently shocking indictment of how the Department of Homeland Security, Immigration and Customs Enforcement, and Customs and Border Protection “pose a grave threat to law and order in our society.”

If Cohen is seeking converts, rather than approving nods and comments at the Goldstein Alumni and Faculty Center Restaurant, she should prepare for disappointment. Her “progressive” condemnations — e.g., to “people who have been disappointed in our country for a long time, the Trump era is not a shock,”

“Reagan-era tactics… stigmatized a subset of social welfare programs aimed at the very poor,” the reform of a single welfare program in 1996 was born in “a moment… marked by many forms of reaction and retrenchment” — make her ideology blindingly obvious.

That’s unfortunate, because “Illegals” depiction of the early population of the United States smashes many myths. And its survey of the ineptitude, thuggishness and unaccountability of federal immigration-enforcement entities should trouble left and right alike.

“Prior to the 20th century,” Cohen writes, “there was little federal regulation of either immigration or the border.” Furthermore, “there was no coordinated large-scale national effort to prevent immigration or report immigrants.” And the new republic thrived.

There were orchards to plant, textiles to spin, canals to dig, railroad tracks to lay, steel to forge, and ships to build. Hard work, to be sure, but for millions, preferable to life back home, where stagnation dominated and opportunity languished.

What was an open door began to close with 1882’s Chinese Exclusion Act, legislation that “wasn’t officially repealed until 1943.” In the 1920s, “patrician white nationalists got their way,” and the Immigration Act “imposed quotas to enact the dominant view… that anyone who wasn’t of ‘original settler’ extraction was racially distinct from and inferior to members of founding nationalists.” Five years later, the Registry Act “created penalties for those who arrived without paperwork after the quota system was put in place.”

But Cohen notes a largely unknown exception to the new exclusionism: “regularization,” a policy that “endured and was renewed for six decades.” It gave undocumented individuals who had lived in the country for years and “not impugned their own moral character” a course toward citizenship.

As a congressional committee put it in 1939: “It is not in the best interest of the United States that there should be a considerable number of aliens here who have resided in this country for many years and who are otherwise eligible for naturalization and anxious to become citizens, but who are prevented from doing so because of the absence of a record.”

“Illegal” dutifully depicts the events and statutes that followed, including internment during World War II, “Operation Wetback,” the game-changing alterations of the Immigration and Nationality Act of 1965, the “boat people,” the Marielitos, and the Reagan administration’s “amnesty.”

Closer to the present, Cohen explains the 2002 creation of DHS, and its divisions such as CBP and ICE, as products of terrorism in the 1990s and Al Qaeda’s atrocities on 9/11. The “hasty but sweeping response” to America’s deadliest mass murder spurred “the largest reorganization of the federal government since the Department of Defense was created in 1947.”

Using budget figures, Cohen makes a compelling case that the Department of Homeland Security “has been transformed from an umbrella organization established to oversee national security-related agencies into a border patrol and deportation machine.”

Along the way, resources have been wasted and lives destroyed.

Customs and Border Protection is now “larger than any other federal law-enforcement agency,” with 21,000 agents, many employees “arrested for drug smuggling, assaults, and an array of other illegal activity,” and consistently poor leadership. Immigration and Customs Enforcement “appears to be following in the footsteps of CBP,” as it grows “more dangerous and emboldened every year in ways that threaten the lives of people … nowhere near the border.”

“Illegal” is an important book. Its research is solid, and it proposes sound reforms to fix the nation’s fear-based, fact-starved immigration morass with compassionate, common-sense and time-tested methods.

Too bad Cohen repeatedly insults the people who need to read her work the most.