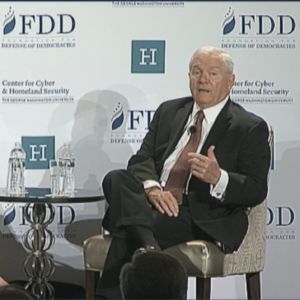 Former Defense Secretary Robert Gates speaks at an event by the Foundation for the Defense of Democracy on Tuesday.
News

When Robert Gates agreed to speak at an event jointly sponsored by the Foundation for the Defense of Democracy, the Hudson Institute, and the Center for Cyber and Homeland Security at George Washington University, the topic was supposed to be Qatar and the Muslim Brotherhood. Instead, he found himself discussing ISIS and the threat of domestic attacks. The former secretary of defense and CIA chief spent the beginning of the interview with Fox News’ Jenna Lee giving his thoughts on yesterday’s suicide bombing outside an Ariana Grande concert in Manchester, England. While the topic of the day was officially the Muslim Brotherhood and Qatar,  the bombing was part of a broader trend that sees terrorist attacks occurring more frequently in the West.

It’s a trend that Gates fears will only continue as ISIS loses territory it had captured in the Middle East.

“This attack was a continuing reminder that as forces close in on Raqqa and on Mosul, winning those cities does not represent a defeat of ISIS itself,” said Gates. In a statement released Tuesday morning, ISIS claimed responsibility for the attack, calling the bomber one of its soldiers. Although this statement has not been officially confirmed by American or European intelligence services, Gates said that the speed with which ISIS’s statement arrived gave him little reason to doubt its veracity.

Likening the attack to both the Bataclan in Paris and a bombing at a German concert last summer, Gates said that he believes that strikes against soft targets are a sign of ISIS transforming and metastasizing as it faces the defeat of the caliphate.

Gates fears that attacks on soft targets in cities throughout Western Europe and potentially in the United States would become increasingly common as ISIS continues to lose territory in the Middle East.

“Sadly, Manchester may be the harbinger of more such activities in the west,” Gates said. “As people scurry from [Raqqua and Mosul] that doesn’t mean that they are defeated individually or that they have lost their commitment.”

For law enforcement and domestic security forces, trying to find these terrorists amid the flood of refugees will be vital to preventing further attacks. However, since many ISIS fighters have European Union citizenship and are attempting to return in the midst of a major refugee crisis, the task of identifying potential terrorists will be “incredibly difficult,” he said and would likely require an off-site screening process in order to be effective.

“Until you can get them to a given place where they can be vetted, it is going to be very difficult to separate members of ISIS who are fleeing from regular refugees,” he said.

Left unsaid was the other side of this situation–namely the thousands of refugees who have already entered Europe legally or illegally over the course of the past year. Given the ease of transportation between member countries in the Schengen Zone, tracking ISIS members with European passports is already a concern.

While the situation in Europe is sobering, Gates was encouraged by President Trump’s recent speech in Saudi Arabia. Gates, who said that his first talk in Qatar as Secretary of Defense was met with “a good deal of nodding and explanation, but not much change,” hoped that the new president’s push for direct involvement by regional players would be more successful than his predecessor’s foreign policy.

“I think that in the last few years there have been a lot of questions about American commitment. I think the president’s message provides a lot of reassurance that we are not walking away,” he said.

For the former secretary, the sense among Middle Eastern allies that America was committed to fighting terrorism in the Middle East was necessary to encourage them to go after cells operating with relative impunity within their borders.

“A lot of the countries in that part of the world have played both sides of the street,” said Gates, who noted that sometimes only a terrorist attack in the area was sufficient to change their behavior.

“Once they have been attacked, they have become unambiguous in going after the terrorist threat.”

Only by going after terrorist cells both at home and overseas can attacks like the one in Manchester be stopped.