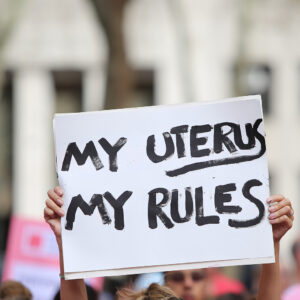 This week marks the 49th anniversary of Roe v. Wade. Will it make it to 50? That’s the question women are asking with increasing urgency — and fierce determination.

Opponents of abortion believe this is their moment. Their support played an outsize role in the election of Donald Trump, and he rewarded them with three Supreme Court justices chosen with the belief they would vote to overturn Roe. They sit atop a judicial system that Republicans have stacked for years with judges who have chipped away at abortion rights at every opportunity.

Since 1973, when Roe was codified, states have enacted more than 1,300  abortion restrictions, and 2021 saw states passing laws restricting and banning abortion at a higher rate than any previous year.

Twenty-three states passed the most extreme legislation imaginable, sprung from junk science and partisan politics, and defended with the lie that the measures are intended to protect women’s health. But these laws are all about power — not health. Power over women’s lives. Power over women’s bodily autonomy. Power to decide women’s future.

On “Roe Day,” we need to recommit to electing lawmakers who will defend abortion rights in Washington and the states. In 2022, we need to vote for women’s lives. Our goal is to elect a 60-vote abortion rights majority in the Senate and flip state legislatures that are currently held by the narrowest of margins.

The balance of power in the Arizona House, for example, was decided by 3,000 votes in 2020, and in Texas, House control came down to 23,000 votes. The situation is similar in Pennsylvania, North Carolina, Michigan and Georgia.

Now, many of those same states are the epicenters of legislative action to make abortion care even harder to access — particularly for Black, Indigenous, and people of color (BIPOC) and those living on low incomes.

Women of color are disproportionately more likely to need an abortion, with Black women seeing the highest unintended pregnancy rate of any racial or ethnic group.  Black women also lead the nation in maternal mortality rates, a number that is sure to rise if Roe falls. The reproductive autonomy of BIPOC women is inextricably linked to the legacy of racial oppression and discrimination.

Today, that legacy is growing in states that have become laboratories for six-week bans and total bans, personhood amendments, fetal heartbeat laws, waiting periods, informed consent requirements, bans on public funding, insurance prohibitions, unnecessary clinic regulations — onerous laws designed to deter women from choosing abortion and make it more difficult to obtain for those that do.

Some of the worst laws have been passed in Mississippi, and we’re awaiting a U.S. Supreme Court ruling in the case involving the state’s 15-week abortion ban that poses a direct challenge to Roe. If Roe is overturned, 12 states have already passed laws designed to be “triggered” following a Supreme Court ruling, and the Guttmacher Institute says 26 states are certain or likely to ban abortion without Roe.

One of the architects of the vigilante Texas law, Jonathan Mitchell, wrote this in a “friend-of-the-court” brief submitted to the U.S. Supreme Court by Texas Right to Life: “Women can ‘control their reproductive lives’ without access to abortion; they can do so by refraining from sexual intercourse.”

There it is — plain and simple. This fight isn’t about outlawing abortion. It’s about control over women. As Ruth Bader Ginsburg said in her Senate confirmation hearing about the decision whether or not to bear a child, “When Government controls that decision for her, she is being treated as less than a fully adult human responsible for her own choices.”

Of course, there are no similar laws that give the government power to make decisions about men’s bodily autonomy.

Over the years, an unprecedented coalition of women’s rights and social justice groups have come to Washington to “March for Women’s Lives,” and demand that women have a right to abortion care, birth control and all reproductive options, including the right to have children and determine their own family formations without government interference.

Now, it’s time to Vote for Women’s Lives. There is no doubt that in each of these states working to ban abortion — and many others — the potential is there to mobilize a feminist voting force that will surpass projections for an off-year election, surprise the pundits, and make history.

The midterm elections will hinge on turnout, and we must resolve to break turnout records from coast to coast. With voting rights still in the balance, the best defense against voter suppression may be voter determination — and we are more determined than ever.

Christian F. Nunes is the president of the National Organization for Women (NOW). She wrote this for InsideSurces.com.