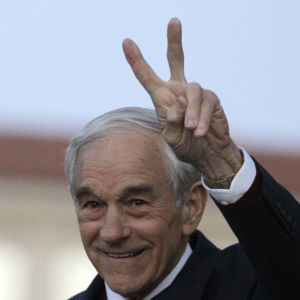 “We felt like their core values matched our product,” operations manager Matt Neville said of Paul and Beck, specifically praising their emphasis on financial responsibility and saving up for the future.

Should doomsday come, however, Paul said in his ad that Harvest Right “might just save your lives.”

This isn’t the first time the company has advertised with Glenn Beck. His television network, The Blaze, has pitched the business repeatedly in live commercials, complete with product demonstrations that evoke the Home Shopping Network.

These spots are central to the conservative media mogul’s plan to transform television advertisements, outlined in a 2014 interview with financing services firm BTIG. Beck explained how, after each segment of his program, the camera pulls back to a separate set high above the stage where he and his co-hosts sit. They remain visible in the background while on-air sales talent makes pitches, and a small countdown clock shows the remaining time before Beck returns. Compared to traditional ads, the approach has been remarkably effective.

“It’s the stupidest thing you’ve ever seen in your life, but nobody turns [the channel], and they actually watch the commercial, because it’s now part of the show,” Beck said.

Key to this strategy is hiring men and women who look like average Americans, not “the beautiful people from Hollywood.”

Acknowledging that not all ads can be product demonstrations, the mogul said he planned to send camera crews out to find the stories that make companies like Harvest Right unique and relay those to his audience.