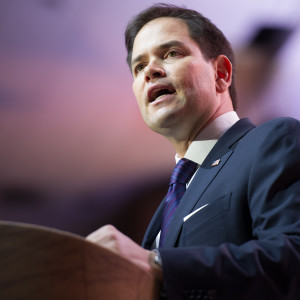 Florida Sen. Marco Rubio amped his criticism Friday of the Obama administration’s support for restrictions to a major National Security Agency surveillance program, and joined with fellow Republicans to call for increasing the agency’s powers in the wake of recent deadly shootings in Paris and California inspired by the Islamic State.

“Earlier this year, President Obama unfortunately pushed for and Congress passed the ‘U.S.A. Freedom Act,’ which greatly curtailed the ability of our intelligence professionals to identify and track terrorist communications,” the 2016 GOP hopeful wrote in an op-ed penned alongside Republican Sens. Tom Cotton of Arkansas and Joni Ernst of Iowa.

“Edward Snowden, mistakenly lauded by some as a hero, not only betrayed this country by releasing highly classified information and defecting to Russia, but spread dangerous misinformation about programs that helped keep Americans safe — namely, the telephony metadata program.”

Under the program, the NSA swept up virtually all Americans’ landline telephone records, likely some wireless records and stored them in a government database for five years. The program was shuttered at the end of November in place of a new framework set down in the Freedom Act.

Earlier this month Rubio signaled his support for a bill drafted by Cotton, the Liberty Through Strength Act II, which would let the NSA keep and search metadata records collected under the old system for five years.

“In the coming months, President Obama will press delete on all the metadata we have collected, and has blocked intelligence professionals from using the database for operational purposes,” the senators wrote Friday. “This means that after Paris and after San Bernardino, we will not be able to use the database to map the networks of the terrorists who killed so many.”

The lawmakers argue the metadata previously sought by the signals intelligence agency, including dialed numbers, call durations and locations, does not allow investigators to view the actual content of communications, and is less invasive than similar data collected by retailers and Internet service providers.

Digital rights activists, industry experts and pro-reform lawmakers — including fellow 2016 GOP presidential candidate Rand Paul — point out such metadata can often reveal intimate details of an individual’s life based on who they call and when, regardless of whether or not the content of those conversations is surveilled.

“Already investigators have reportedly been unable to access some of the phone records that they sought for the jihadists who murdered fourteen Americans last week,” Rubio, Cotton and Ernst wrote.

“By tearing up this phone book, President Obama and his allies in Congress are unilaterally disarming the United States in the fight against terrorism and, at a critical moment, stripping a critical tool from the very people in the intelligence and law enforcement communities whose duty it is to keep us safe.”

It’s the FBI’s job to identify to whom the phone numbers investigated by the NSA belong to by seeking the information from providers. As a result, the agencies rely on each other to conduct counterterrorism investigations.

The director told Congress Wednesday it’s too early to tell whether the program will hinder law enforcement in general, but added “it should work as well or better than what we used to have.”

Adm. Mike Rogers, director of the NSA, told Congress the opposite in September, saying unequivocally the program would reduce his agency’s effectiveness in combating terrorism.

At the time Oregon Democrat and anti-surveillance hawk Sen. Ron Wyden told Rogers a panel established by President Obama to review the bulk collection program in the wake of the Snowden leaks disagreed with him, and found “there’s no value to bulk collection that could not be obtained through conventional means,” and that the program never prevented an attack.

While the metadata program endorsed by Rubio and nine other Republicans doesn’t surveil the content of communications, another authority endorsed in their bill does. Under the Liberty Through Strength Act II, surveillance authorities derived from Section 702 of the 2008 Foreign Intelligence Surveillance Amendments Act would be made permanent.

Section 702 authority permits the agency to conduct “upstream” surveillance by tapping into the physical infrastructure of the Internet, such as undersea fiber cables, to intercept the actual content of communications, including email text, photos and instant messages as they move in and outside U.S. borders.

Lawmakers and activists are already lining up to challenge a renewal of Section 702, set to expire in late 2017.