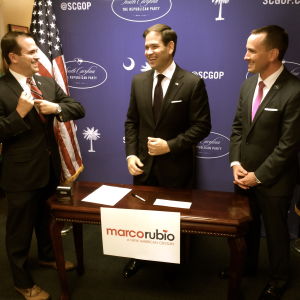 COLUMBIA, S.C. — Saying the afternoon heat here reminded him of his native Florida, Sen. Marco Rubio arrived at the South Carolina Republican Party headquarters on Monday and became the first 2016 presidential candidate to file for the state’s primary.

“I look forward to being here often between now and the 20th of February,” the 44-year-old lawmaker told reporters. He said America is facing “another pivot point in our history — a moment when the world and the economy around us is rapidly changing and we need a new generation of leadership with new ideas that can embrace the opportunities this era provides.”

Rubio later fielded questions from the press, addressing his recent record of absenteeism in the Senate, the latest campaign controversies involving some of his Republican rivals, and several of his policy positions.

Responding to Politico’s reporting that he’s been absent from the Senate more than any other lawmaker running for president this cycle, Rubio said he’s confident that he represents his constituents well. He argued that missing some Capitol Hill activity is inevitable during a campaign, but stressed that he makes key votes and receives regular briefings to stay up to speed.

“We’re doing the best we can with it,” he said.

Asked next about the campaign maneuverings of two other GOP presidential hopefuls, Rubio took care to tread carefully.

He said reporters would need to ask former Arkansas Gov. Mike Huckabee what he meant by saying that President Barack Obama’s nuclear deal with Iran would “take the Israelis and march them to the door of the oven.”

The senator also declined to comment directly on bombastic business mogul Donald Trump, who generated a media frenzy last week by giving out the cell phone number of Sen. Lindsey Graham, R-S.C., during a campaign speech.

When InsideSources asked Rubio if he could back Trump as the Republican’s presidential standard bearer, the senator said that he will “support the nominee of the Republican Party.”

InsideSources also questioned Rubio about energy policy, specifically the Environmental Protection Agency’s new Clean Power Plan, which calls for a 30 percent reduction of carbon emissions by 2030. Many southern states are opposing the rule, characterizing it as burdensome federal regulation, and Rubio sounded sympathetic to them.

“Not just in South Carolina, but across the country, anything that increases the cost of doing business is ultimately passed on to the consumer,” he said.

Rubio added that costly regulation is particularly problematic as America competes to be a global leader in manufacturing once more:

Unfortunately, we have federal agencies today who, by rule-making, try to achieve policy aims that they can’t do through the legislative process. If I’m blessed to be president of the United States, we will protect our natural environment, but we will also fully utilize our energy resources in this country. We will make America the best place in the world to manufacture, and energy is a critical part of that.

These won’t be the last energy policy comments made by a Republican presidential candidate in Columbia this week. InsideSources will host its latest “Road to 2016: Informing the Energy Debate” discussion Tuesday morning.

Sponsored by America’s Power, the event will feature former Sen. Rick Santorum, R-Pa., another 2016 hopeful. A live stream of the conversation will begin at 8 a.m. eastern.