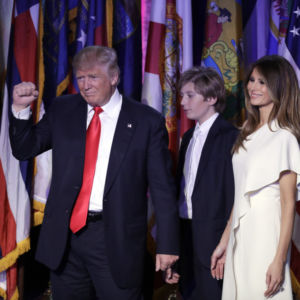 Rumored candidate for the open Republican seat on the Federal Communications Commission Ben Moncrief has a now-deleted Twitter history of criticizing President Donald Trump, who’s reportedly considering him for the job.

Moncrief, vice president of government relations at C Spire — the sixth-largest wireless provider in the U.S. — tweeted and retweeted comments and articles criticizing Trump throughout the campaign season and into December.

He recently appeared on the shortlist of candidates to fill the only vacant Republican seat on the FCC. He’s since seemingly deleted his Twitter account, including the tweets critical of the president.

The C Spire lobbyist posted a number of critical tweets under the now-deleted @benmoncrief twitter handle. Tweets were recorded in a document moving through Washington telecom policy circles obtained by InsideSources, and were captured via social media analytics tool Sysomos MAP.

During primary season Moncrief retweeted an op-ed on then-candidate Trump from The Washington Post, including the excerpt “All children are Donald Trump before they are taught manners.” A second retweeted WaPo article by Buzzfeed’s Ben Smith declared “Trump manages to cultivate a rep for charity without giving a dime.” Another retweet of Kevin Madden declared “Trump has zero understanding of what SCOTUS does (and prev said judges sign bills). Schoolhouse Rock time.”

In response to Speaker Paul Ryan’s declaration in May he was “not ready” to endorse Trump, Moncrief tweeted “Ya know, Paul, I’m #NotReady either.”

Moncrief made fun of Trump throughout his acceptance speech at the Republican National Convention in July, tweeting: “Substantive policies announced tonight. 1. A wall,” “Somebody hit the Repeat button? Or is it the Shuffle button? I can’t tell,” and retweeted American Conservative writer Rod Dreher’s “This is just fragmented blather.”

In October, Moncrief tweeted a WaPo column by Michael Gerson describing Trump as an “authoritarian populist” whose support “reveals fragility at the heart of American democracy.”

“Important to understand this point regardless of what you plan to do with your POTUS vote,” Moncrief wrote.

After Trump’s November victory, Moncrief tweeted “Well. We sure went from ‘drain the swamp’ to ‘feed the alligators’ awful quick.”

He was especially critical of Trump for naming former lobbyists for big telecom to his FCC transition team, a group Moncrief, as a telecom lobbyist himself, is now apparently seeking to join.

The last linked an article described Trump’s picks to lead his FCC transition team as opponents of net neutrality.

The C Spire vice president would likely be an advocate for small companies with businesses before the FCC, and less so for larger incumbent telecom providers like AT&T and Verizon, competitors to his Mississippi-based carrier. Moncrief opposed AT&T’s proposed merger with T-Mobile and sits on the board of the Competitive Carriers Association, which lobbies in support of smaller telecom providers.