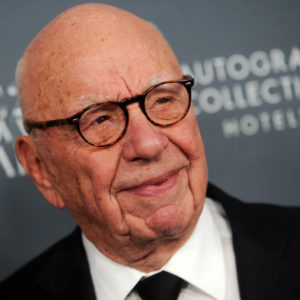 Yet, it can be argued, another rich man might have had a much larger effect on the politics of this century: Rupert Murdoch.

Murdoch is the uber publisher and broadcaster of our time, and manipulator of public opinion. In Britain, he is courted by prime ministers and in the United States by politicians, left and right. Since the emergence of Fox News as the champion of the angry white voter, he has been the comfort and the looking glass of one Donald Trump.

Murdoch is a phenomenon. He is courageous, opportunistic and blessed with an unparalleled ability to divine the often-hidden aspirations of his readers and viewers.

He also does not care what people think. That may be his greatest strength. He does what he damn well pleases and his success at doing that is played out on the world stage. He has gained the social and cultural recognition of media supremacy but has not sought them.

His British newspapers — more than half the people who read a newspaper in Britain read one owned by a Murdoch company — backed Britain’s seemingly suicidal vote to leave the European Union.

The tone of his anti-European ravings was summed up on Nov. 1, 1990, when Britain turned its back on European monetary union with the now famous front-page headline “Up Yours Delors!” in The Sun, Britain’s largest circulation daily newspaper. At the time, Jacques Delors was president of the European Commission.

The Sun was not content just with its headline: It advised all its readers to turn toward Europe and make an obscene gesture. Not exactly sophisticated reasoning, but good at getting the nationalistic sap up.

The same thing you can get on Fox day after day from Sean Hannity, Lou Dobbs and Laura Ingraham, and the thin gruel of reason served up by the breakfast team. Gruel, it must be noted, that is nourishment and justification to President Trump.

I still marvel at what amounted to Murdoch’s conquest of British newspaper publishing. It was genius: He identified a right-wing, jingoistic streak in the British working-class male and he went for it with chauvinistic fury — and naked female breasts on Page 3. Murdoch’s legendary conservatism did not extend to women in front of the camera. If raunchy sold, raunchy it would be.

It paid off and enabled Murdoch later to take over the legendary Sunday Times and daily Times and to finance his American adventure, where something of the same formula applied to cable television has been diabolically effective.

Murdoch’s newspapers in Britain played a key role in the Brexit vote. It is less clear whether Fox played a role in Trump’s election, but it did not hurt. The trick in publishing or broadcasting to an ideological base, a conservative strategist once told me, is to keep the faithful, not to change minds. More troubling is the effect Fox has as an enabler for Trump’s more egregious actions, and his banal but damaging attacks on the media.

Fox floats the idea the mainstream media is a kind of monolithic, left-wing conspiracy and Trump amplifies it. Between Fox and Trump, they toss the mendacities back and forth until the authorship is lost. It is awesome to think mainstream can be turned into a pejorative just through repetition.

Murdoch is a conservative, except in journalistic vulgarity and when it is advantageous to go left, as he did in Britain when he backed Tony Blair and Labor in 1997. In New York, he cultivated the Clintons — maybe as insurance, maybe just as the entitlement to know power that goes along with his own power, or he may just have liked them.

Having been curious about Murdoch and his ways — and at times lost in admiration — since he figuratively invaded Britain in 1969 and seen the good and the bad that followed, I think he toys with politicians and is amused by his ability to influence events. Not much more and not much less.

There is a British expression for stirring things up: putting a bit of stick about. No one has put more stick about than Murdoch and he is not done. Tune in to Fox tonight and just see.