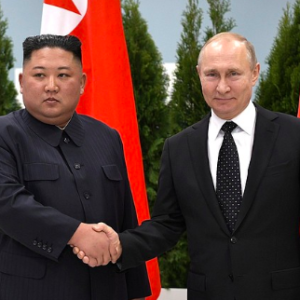 It’s easy to overlook the Russian stake in the Korean peninsula. We hear so much about China’s pivotal role, its influence over North Korea, its enormous trade with South Korea, that we tend to forget the Soviet Union shared responsibility with the United States for the artificial division of the peninsula between North and South at the 38th parallel in 1945.

Soviet forces ruled  the northern “half” of Korea after the Japanese surrender in August 1945, setting in motion the events that led to the installation in Pyongyang more than three years later of a leader who had served as an officer in the Soviet army, had returned to the port of Wonsan on a Soviet commercial vessel and then had been placed in charge of a provisional government in Pyongyang. This leader, Kim Il-sung, was installed as premier of the newly formed Democratic People’s Republic of Korea on September 9, 1948, 25 days after the American-backed Rhee Syngman was inaugurated as first president of the Republic of Korea, South Korea, on August 15.

The get-together of Russia’s president Vladimir Putin with Kim Jong-un, grandson of the founder, revived other historical memories. Kim Il-sung, after leading his guerrillas against the Japanese, sat out World War II in or near Khabarovsk, having been commissioned as a captain but without real responsibilities. Never in harm’s way in the war, he got along famously with his Soviet benefactors before taking over from them in Pyongyang.

Lest we forget, the Soviet Union offered crucial support for the North Koreans during the Korean War. China gets most of the credit for rescuing Kim from defeat, rushing in hundreds of thousands of troops, catching the Americans completely off guard just as they thought they had pretty much won by reaching the banks of the Yalu (or Amnok) River, however briefly.

While the Chinese troops were rolling back U.S. Marines and Army soldiers, the Soviet Union provided fighter planes, tanks and artillery pieces. Kim had begged the Soviet dictator Josef Stalin to endorse the invasion of South Korea in June 1950 and then pleaded with him to stave off annihilation. Soviet pilots flew missions against the Americans, and Red Army officers advised the depleted North Koreans.

The Russian stake goes still deeper into history. Tsar Nicholas II sent his forces to crushing defeat at the hands of the Japanese in 1905,  ending Russia’s drive for control not only of Korea but also of Manchuria and much of Northeastern Asia. The Soviet army, entering World War II in the Pacific in its final days, avenged that humiliation, seizing Sakhalin and several islands that the Japanese still claim as their own and capturing thousands of Japanese soldiers, many of whom never returned.

Stalin during the Korean War also saw a way to tie down American forces while expanding and solidifying Soviet power in eastern Europe. After Stalin’s death in March 1953 the Kremlin, under Nikita Khrushchev, got serious about peace though the Soviet Union was not a signatory to the truce that ended the war four months later.

Putin now sees himself as leading a resurgent Russia, reasserting Russian power and influence in eastern Europe, notably Ukraine, and eager to counterbalance China and the United States in Asia. The fact that he would finally sit down for his first summit with Kim Jong-un shows his desire to expand Russian power eastward. He’s undoubtedly as anxious to counter Chinese influence as he is to remind the United States of Russian strength in the region. The Russian Navy operates out of Vladivostok, a city and port that was largely closed to non-Russians before the Cold War ended nearly 30 years ago.

But why, considering Russia’s stake, did it take so long for their emissaries to talk up a Putin-Kim summit? That’s an important question considering that Kim, an international recluse after the death of his father, Kim Jong-il, in December 2011, for the past year or so has made summitry a hallmark of his rule.

China’s president Xi Jinping, U.S. president Donald Trump and South Korea’s president Moon Jae-in have gotten to know Kim in a series of summits, raising hopes of peace in our time in Korea. Kim Jong-il journeyed into Russia for summits with Putin in 2001 and 10 years later with Dmitry Medvedev, Putin sidekick who was then filling in as president.

Each time Kim Jong-il traveled by train, the mode of transport chosen by Kim Jong-un for the trip to Vladivostok and the meeting with Putin. If Kim did not place a high priority on seeing Putin, the impact of sanctions may have made him change his mind.

Russia also has another bond with North Korea that no one’s mentioning. Kim Jong-il was born near Khabarovsk while Kim Il-sung was serving near there in the Soviet army. As long as the North Koreans flaunt the mythology of Kim Jong-il’s birth on the slopes of sacred Mount Paektu, however, we can pretty well rule out the possibility of Kim Jong-un ever bowing low in homage to his father’s birthplace or his grandfather’s war-time home.