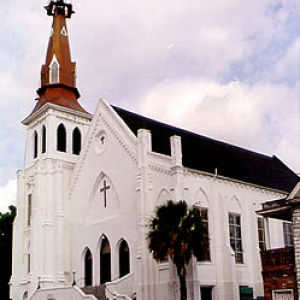 When South Carolina State Sen. Clementa Pinckney, D-Charleston, was killed in June’s mass shooting at the Emanuel African Methodist Episcopal Church where he was a pastor, the political and religious leader was mourned far and wide.

Particularly in progressive circles, Pinckney’s death was a major blow — the loss of a strong liberal voice in the state legislature and beyond.

Now South Carolina union officials are making a push for increased church activism in support of their causes, urging other area pastors to continue Pinckney’s legacy.

Speaking on the Charleston gospel radio station WJNI last Saturday, South Carolina AFL-CIO Legislative Liasion Loreen Myerson said, “We’re asking our friends in the churches, in the synagogues, in the mosques … to give a sermon on the dignity of work.”

Myerson added that the AFL-CIO is providing houses of worship with resources, including scriptural passages related to the plight of working people and even model sermons. In terms of timing, the group is also promoting the movement for a “Labor Sabbath” the weekend before Labor Day in September.

Myerson called him “an amazing senator who strove to stand up for working people, whether it was in the pulpit at ‘Mother Emanuel’ or in the statehouse.” She said “his loss is crushing, but at the [AFL-CIO] we want to make sure that we don’t lose sight of what his message was, what his values were.” She later described the Labor Sabbath initiative as “one way to take our pain and put it towards something constructive.”

Appearing on WJNI with Myerson, South Carolina AFL-CIO President Erin McKee made the point that the labor union faces an uphill battle in the Palmetto State. “I do think a lot of it is a cultural thing as far as people being afraid of unions,” she said. “They weren’t taught about unions in school. They don’t know the history.

McKee then argued that this phenomenon has to do with the region’s history:

The South is where slavery started, and I think a lot of people still have a problem with being integrated and they don’t think that everybody deserves the same, and that’s what organized labor is all about — that everybody gets the same pay for the same work.

The South Carolina AFL-CIO has already made headlines in the 2016 presidential campaign by putting out a statement in support of Democratic hopeful Bernie Sanders, the Vermont senator. As Politico reported, the national AFL-CIO forced the organization to “walk back the pseudo-endorsement,” noting that state groups can’t make formal endorsements.