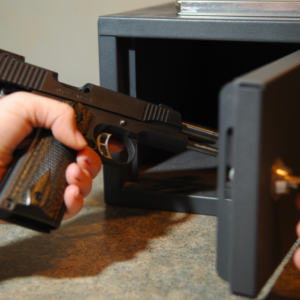 What if one simple step could cut in half the chance that a friend, co-worker or family member dies by suicide?

Suicide is a national tragedy that affects all Americans, including veterans. It’s the 10th most frequent cause of death in the United States, and is responsible for the deaths of 47,000 Americans each year, including more than 6,000 veterans.

But there’s a growing body of evidence that says there are ways we can make a difference for the people we care about.

We know that access to lethal means when someone is already at risk for suicide can further heighten that risk. In 2017, firearms were used in nearly half of all suicides among Americans and nearly 70 percent of veteran suicide deaths. Nearly two-thirds of all deaths involving firearms are suicides.

There is no single cause for suicide. But safe firearm storage practices, such as storing a firearm locked and unloaded when it is not in use, can decrease the risk for suicide by limiting access during times of distress. This simple step can put crucial time and space between suicidal thoughts and seeking out a firearm.

In fact, one study showed that people who kept their firearms locked or unloaded were at least 60 percent less likely to die from the last tragic act of suicide compared to those who stored their firearms either unlocked, loaded, or both.

Research has shown that the period of acute suicide risk is often brief. It is a myth that a person who wants to die by suicide will find a way to do so. If a lethal means such as a firearm is unavailable at the time of emotional crisis, the attempt may be prevented.

The Department of Veterans Affairs knows we help can end suicide among veterans, but it also knows VA can’t do it alone. That’s why VA is partnering with the National Shooting Sports Foundation and the American Foundation for Suicide Prevention to encourage all Americans to help prevent suicide by employing safe firearm storage practices in their own homes and promoting these practices in their local communities.

We’re already working with six states and the District of Columbia to help promote safe firearm storage that emphasizes service members, veterans and their families. The efforts we make in this project will build up to a national outreach effort to encourage safe firearm storage in all communities.

We’re also looking to involve veterans, and we know there are several ways people can take meaningful steps to help veterans in need:

—Talk about the importance of safely storing firearms when not in use. Consider inviting friends and relatives to take part in the discussion. Be sure that all household members understand safety guidelines concerning firearms.

—Separate firearms and ammunition when not in use. Research shows that risk is significantly reduced when firearms are stored separately from ammunition.

VA and our two partner organizations are proud to collaborate to guide coalitions through the important work of promoting safe firearm storage in local communities. We implore all Americans to help in this work. Be there for the veterans in your life by learning about, adhering to, and starting conversations about safe storage methods. By staying informed about suicide prevention best practices, we can help save lives.

If you or someone you know is in crisis or having thoughts of suicide, support is available. The National Suicide Prevention Lifeline is available 24/7/365 to all at 1-800-273-8255. Veterans can contact the Veterans Crisis Line at 1-800-273-8255 and Press 1, text to 838255, or chat online at VeteransCrisisLine.net/Chat.  To learn more about mental health and suicide prevention resources, please visit the American Foundation for Suicide Prevention at www.afsp.org.

Matt Miller is the acting director of suicide prevention for the Department of Veterans Affairs; Robert Gebbia is the CEO of the American Foundation for Suicide Prevention; and Steve Sanetti is the CEO of the National Shooting Sports Foundation. They wrote this for InsideSources.com.