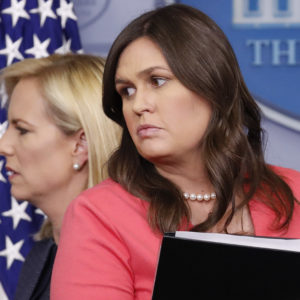 Public accommodations can be a thorny matter. Historically, Virginia has had its problems, as have other states and nations.

In Marshall, Va., a little greasy spoon became notorious and its owners served time in prison because they refused to serve people of color. Very soon, the only people who frequented the joint were journalists who hoped to catch the owners in the act of violating the state’s public accommodations law.

In a bar in Baltimore, I watched the owner lie to a black man who wanted service. “This is a private club, but I could sell you something to go,” the owner said. It wasn’t a club; it was racism at work.

At a roadside restaurant in South Africa, before the fall of apartheid, my family and I and our African driver stopped for a bite. I was told that our driver couldn’t enter this humble establishment with me and my family and would have to eat in the car. We all ate in the car.

Obviously, there was no race dimension in the booting of White House press secretary Sarah Sanders from the Red Hen restaurant in Lexington, Va., but there was the owner’s anger, fury and protest. It was a comment on actions of the administration Sanders defends daily. Lexington, located in the Shenandoah Valley, is a thoroughly Trump town — home to the Virginia Military Institute, Washington and Lee University, flag-bedecked houses, pickup trucks with NRA decals, and Fox on the box.

The restaurant owner, Stephanie Wilkinson, said Sanders didn’t meet the restaurant’s standards of kindness, compassion and cooperation and that’s why she kicked out Sanders. Clearly Wilkinson was vexed, as many are these days, with the profound national division over the treatment of immigrant children at the border and the constant defense of mendacity by Sanders.

While political speech deserves defense, I think one deserves to eat one’s vittles without victimization. Chowing down shouldn’t be an opportunity for others to speak up.

Customers who meet reasonable standards of behavior and dress shouldn’t be denied service or yelled at while exercising their right to patronize public places. I think it was wrong for protesters to attack Department of Homeland Security Secretary Kirstjen Nielsen at a Mexican restaurant in Washington. Some privacy in public is an entitlement, even if the president behaves in outrageous ways with ad hominem attacks on allied leaders, schoolyard abuse of his detractors and a rabid-dog approach to public life.

There isn’t much for which I can claim the moral high ground, but when it comes to restaurants, I have credentials — top-drawer bona fides, as it were.

Back in 1962, I was employed by one of the London newspapers, notorious for intruding on peoples’ privacy. My assignment was to follow a couple of lovebirds around London. They were Elizabeth Taylor and Richard Burton and my job was to spend all day and much of the night at the famous Dorchester Hotel, where love was being committed.

Except that they never entered stage center.

Every day I made my way to the five-star hotel and sat around, had drinks (which the hotel provided free) and hoped to see them coming or leaving or, fond hope, kissing on the backstairs. No joy. Even hopes of asking the chambermaid about the bed were nobbled by hotel security.

Then one Sunday in Dulwich, a green and pleasant oasis in south London, my then wife, a brilliant journalist, Doreen King, and I went for our Sunday lunch, an English tradition, at a very nice pub. And there they were, my prey: Taylor and Burton as large as life having lunch. Not just having lunch, but at the next table.

My wife whispered, “Are you going to call the office and get a photographer? What questions have you got ready?”

I looked at the lovers at the next table. Never have I seen two people so in love, so happy with each other. My wife and I agreed silently to leave them alone.

I’d like to be able to say that Burton winked, but he didn’t. He had eyes only for Taylor.

To my mind, the lovely (Taylor and Burton) and the less so (Nielsen and Sanders) should be able to enjoy a private meal in public. I missed a scoop on this belief.