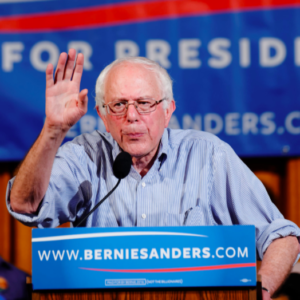 In a surprise move for a democratic socialist, Sen. Bernie Sanders has declared his support for a scandal-plagued Native American tribe at the center of a controversial casino deal.

“I stand with the Mashpee Wampanoag tribe in their fight to restore lands that belong to them, and I oppose the disgraceful decision by the Trump Administration to disestablish their lands held in trust by the Department of Interior,” Sanders tweeted on Sunday. “We must reset the partnership between the federal government and Tribal Nations by putting land – and control of that land – back in the hands of tribes.”

Sanders’ tweet was in response to Interior Secretary David Bernhardt’s decision to undo a questionable Obama-era decision by taking the tribe’s land out of trust and ordering the reservation be disestablished.

The Mashpees are a Massachusetts-based tribe that has been lobbying for both recognition and a high-dollar casino deal for decades. They didn’t become a federally recognized tribe until 2007, and only after paying tens of thousands of dollars to corrupt D.C. lobbyist “Casino Jack” Abramoff.

He eventually went to prison on conspiracy and fraud charges related to his work with various Indian tribes. Soon after, the Chairman of the Mashpee Wampanoag Tribe who worked with Abramoff, Glenn Marshall, was sentenced to 41 months in prison for crimes he committed “in connection with efforts to secure federal recognition for the Tribe,” according to the FBI.

None of this stopped the Obama administration from taking 321 acres in the towns of Mashpee and Taunton, Massachusetts, into trust in 2015 and declaring it a sovereign reservation on behalf of the tribe. And with that designation, the Mashpee Wampanoags entered an agreement to build and operate a $1 billion casino complex with the international gaming firm Genting Malaysia.

By backing the Mashpees, Sanders is supporting the cause of Genting, a multinational conglomerate linked to a corrupt kickback scheme that helped bring down Malaysia’s government in 2018. They operate casinos and resorts in ethically-challenged countries like China and the Philippines “that together represent the world’s most far-flung gambling empire,” Asian Review reports.

Unfortunately for the company, which fronted the tribe close to $500 million against future revenues from their deal, both the Department of the Interior and a federal judge have since ruled against the Obama administration’s decision granting the tribe their land in trust. And now, after years of legal and political fighting, the Trump administration has released the land and disestablished the reservation.

“For far too long, the federal government has adopted policies that take land away from tribes, ignore treaty rights and interfere with tribal management of their own resources,” Sanders tweeted in support of the Mashpees. “We need a clean Carcieri fix to reaffirm the authority of the Secretary of the Interior to take land into trust for all federally recognized Indian tribes. A Sanders administration will prioritize that.”

Carcieri is a reference to the US Supreme Court’s 2009 ruling in Carcieri v. Salazar that the federal government could not take land into trust for tribes that were federally recognized after 1934.

But even without the Supreme Court precedent, Sanders’ support for the Mashpees would be problematic. Their $1 billion arrangement with Genting is designed to enrich a wealthy international conglomerate, and to do so through casino gaming.

Research about America’s gaming industry is clear: It collects a disproportionate amount of its wealth from the low-income and minority Americans Sanders claims to champion.

And the Mashpee’s management scandals have continued long since the Abramoff era. In 2019, Tribal Council Chairman Cedric Cromwell was stripped of his fiduciary duties over his questionable handling of the tribe’s finances. In addition, it was discovered he and his wife owed tens of thousands of dollars in unpaid taxes going back to 2010.