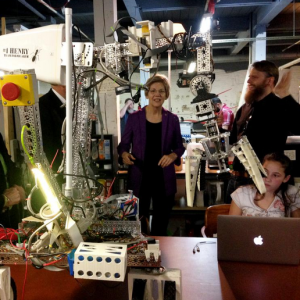 Democratic senators including 2016 presidential contender Bernie Sanders and Elizabeth Warren of Massachusetts are asking the Federal Communications Commission to investigate “huge price increases” for Internet service in recent years, as competition between providers decreases amid proposed mergers between major providers like Time Warner Cable and Charter Communications, currently under review by the FCC.

In a letter sent to FCC Chairman Tom Wheeler this weekend, Sanders and Warren, along with Minnesota Democrat Al Franken and Massachusetts Democrat Ed Markey, said Americans are facing fewer options for service in the wake of such mergers, resulting in less competition and higher prices across the country.

“[A]s the telecommunications industry becomes increasingly concentrated, this lack of choice has resulted in huge price increases and often poor service for consumers,” the senators wrote, asking the commission to assist “empowering Americans with more information about ever-increasing rates for cable and Internet services and how providers calculate consumers’ monthly bills.”

“This request has added urgency in the context of the proposed merger between Charter Communications and Time Warner Cable, which will only increase concentration in the cable and broadband markets.”

Consumers are often provided with little information or explanation about the fees and costs associated with service, according to the senators, who pointed to Time Warner Cable’s monthly cable modem rental fee as an example. In 2012 the fee was $3.95 before rising to $5.99 in 2013 and $8 in 2015 — an increase of 203 percent in three years. Only 37 percent of Americans currently have access to more than one high-speed broadband provider.

The senators called on the agency to begin gathering and reporting specific broadband service information, including the average price consumers pay for broadband by state and provider, as well as the average paid in urban and rural areas.

“At the very least, Americans should be able to understand the price of the product they are buying and what their neighbors are paying for the same service,” lawmakers wrote.

The FCC has yet to respond to the letter, but any response will likely be watched closely by congressional Republicans and broadband industry lobbyists, many of whom insist the agency’s net neutrality Open Internet Order, in effect as of June, gives the agency the power to regulate rates providers charge consumers for service.

Since introducing the rules in February, Wheeler has repeatedly denied the agency will engage in rate regulation.

“I hope somebody files with this,” Wheeler told a Senate committee in May about a potential complaint over rate regulation. “Because if they do, I hope we will be able as a commission to take an action that makes it clear that ex ante rate regulation is not what we’re after, and that we will produce a decision that makes it clear that’s not what we’re trying to do here.”

“Our goal is not to have rate regulation,” Wheeler continued. “Some people have said that this gives us some kind of ex post authority. I would like to be able to make it clear that it is not a rate regulation tool.”

Fellow FCC Commissioner Ajit Pai, who testified alongside Wheeler, countered that though the rules state the commission won’t engage in ex ante regulation (setting rates ahead of time via tariffs and other regulatory tools), they give the FCC the ability to review and determine if the rates charged by ISPs to consumers are “unjust or unreasonable,” as well as the rates charged to companies for interconnection.

A group of Internet content creators, trade groups and activists including Sprint, Public Knowledge, the Broadband Coalition, the Computer and Communications Industry Association, COMPTEL, Engine, Level 3 and others  joined the senators’ push Monday with the launch of Competify — a new coalition promoting a campaign urging the FCC to “restore broadband competition by fixing the broken market for high-capacity broadband lines.”

“A few huge Internet gatekeepers now dictate when, where and how much you pay for the broadband access,” the group said on its website. “And worse, these companies overcharge both consumers and businesses billions of dollars every year, imposing a huge cost on the U.S. economy.”

“The FCC must address anti-competitive behavior in this market to reach its goal of delivering better, faster, cheaper broadband to all Americans.”

Last week the FCC announced the establishment of a team to review the Time Warner Cable/Charter Communications merger proposal, which if approved, would green-light the creation of the third-largest television provider in the country, serving 17.3 million customers, service almost 40 states and gather together 19.4 million broadband subscribers — the second largest of any broadband provider in the U.S.