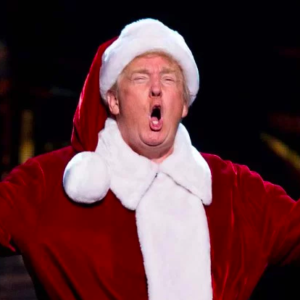 Santa’s Gift to the Democrats — Will They Break It While Opening It?

The Democrats have no need to fret about what they’ll get for Christmas this year. Their worry shouldn’t be the gift, but rather how they choose to open it.

The gift is global warming.

Don’t call it climate change; that fuzzies the issue. Call it for what it is: global warming. It isn’t change but heat that is melting the polar ice cap, stripping Greenland of its ice sheet, opening Arctic shipping lanes and sinking Venice, one of the jewels of civilization.

Global warming isn’t an existential threat but a real problem that is here, real and now. It is happening today, this hour, this minute, this second.

President Trump has taken his stand. He said of the rising seas and wild weather, which are science-supported evidence of global warming, “I don’t believe it.”

That is a political gift, shimmering and alluring. That is a target affixed to Trump. That is an image as evocative as Nero’s fiddling or Canute’s apocryphal ordering the waves from the incoming tide to stop. That is an opening wide enough for the Democrats to drive a truckload of election victories through.

Democratic strategists need to tell their candidates, “The climate, stupid!” All they must do is to hammer the Republicans and the administration relentlessly on the matter of global warming.

But this gift, looking so unassailable, may be undermined by the current stars on the left of the party. They have a sledgehammer approach and they may do damage to the gift before it is unwrapped.

Their passion is for the simplistic-but-seductive Green New Deal. It defines the problem as fossil fuels and wants to ban them. Then it prescribes the fixes. Bad move.

The cost and disruption of the fixes are ignored. That is why former Secretary of Energy Ernie Moniz — a man who knows a lot about both politics and energy — is pushing a concept he calls the Green Real Deal, which aims not to eliminate all fossil fuel use but to move to “net zero.” It means that many technologies will be used, including nuclear power and carbon capture and storage. It means that some fossil fuels will be used so long as their impact is mitigated by gains elsewhere.

These finer points of energy policy and environmental mitigation are too complicated for an election debate. They give too many opportunities for opposition ridicule. Too many handles for the Ridiculer in Chief and his acolytes to grab.

The Democrats need to repeat that the Republicans denied global warming even as the seas are rising. They need to sound the alarm that Boston, New York, Charleston and Miami may be headed for disaster very soon. They need to repeat it over and over, and then some more.

When running an election, a simple, repeatable message, without the details of how the goal will be achieved, wins the day. Bill Clinton’s message served up by James Carville, “The economy, stupid!” won the day. Trump’s enticing “Make America Great Again” cry resonates.

The Democrats need only to dwell on rising sea levels and that the Republicans have repudiated the science. “The seas are rising and we’re going to do something about it,” is a reasonable Democratic message.

Nixon showed us the effectiveness of framing the problem and hinting at a solution. “I have a plan,” he said about Vietnam. He didn’t mention it included bombing Cambodia.

The Democrats can win on a strong climate message. The seas are rising, wildfires ravage California year after year, Puerto Rico and other islands have been devastated by high-category hurricanes, and we may lose Venice.

A slam dunk in 2020? Don’t count on it. The Democrats likely will lard the message with social concerns, impossible marketplace tinkering and, in so doing, smash their winning gift as they open it. The Democrats are good at that, fatally so.