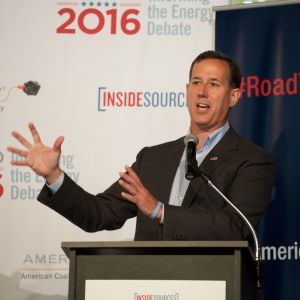 Speaking at the latest “Road to 2016: Informing the Energy Debate” discussion hosted by InsideSources and sponsored by America’s Power, the Republican presidential candidate said more manufacturing jobs are key to rebuilding the country’s hollowed out middle class. He argued that fossil fuels and “the fracking revolution” could be providing more employment opportunities for many of the 74 percent of Americans without a college degree, while also creating a geopolitical advantage for the U.S.

In Santorum’s view, exporting more energy would be a valuable way to exercise “soft power,” making America even more influential in the world. In fact, he suggested this could reduce the need for military involvement abroad:

In a counterintuitive argument, Santorum event painted himself as an environmentalist of sorts, saying voters concerned with climate change and carbon emissions should want less energy production to take place in the countries that pollute the most. 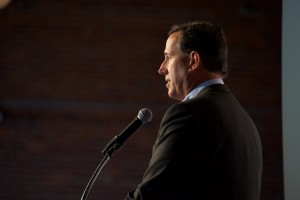 “I’m going reduce the carbon footprint of the world by taking jobs out of China and moving them back to the United States of America,” he said.

Tuesday’s InsideSources event came after Santorum appeared on national television five times Monday, attempting to raise his profile and secure a spot in next week’s first debate of the Republican presidential primary. The former senator is currently registering in the single digits in national polling, and debate sponsor Fox News has said that only the top 10 candidates will be permitted to participate. 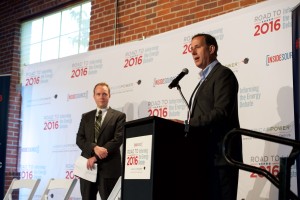 As the grandson of a coal miner, Santorum has sought to distinguish himself as a populist Republican concerned with the plight of blue-collar workers. Although he receives media coverage mostly for his conservative positions on cultural issues — he’s a staunch opponent of abortion rights and gay marriage — he has encouraged the GOP to acknowledge growing economic inequality and wage stagnation as major national problems.