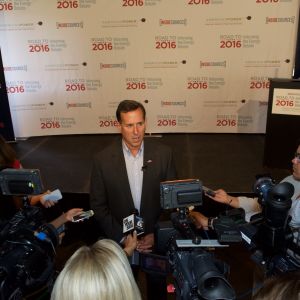 It was quite the get last week when Rachel Maddow nabbed former Pennsylvania Sen. Rick Santorum, one of the 17 Republicans now running for president, for a primetime interview on MSNBC.

The liberal network’s top host freely admitted that members of the GOP “generally don’t want to talk to me” and acknowledged that she disagrees with Santorum — perhaps the nation’s best-known conservative culture warrior — on “almost everything” politically.

But Maddow also noted something progressives may appreciate about the former senator: “he is the one Republican candidate who says he is in favor of raising the minimum wage.” Santorum has called for hiking the current hourly rate of $7.25 by 50 cents every year for three years. (Retired neurosurgeon Ben Carson has also backed an increase to the wage but has not specified what rate he’d like to see.)

InsideSources asked Santorum about his position in Columbia, S.C., on Tuesday, and he argued that the GOP is “sort of out of step with where most of America is” on the issue — especially when some candidates suggest there shouldn’t be a minimum wage at all.

“I think most of America supports some sort of floor for a wage out there that doesn’t have an impact on young people’s employment or driving up the cost of labor and therefore inflation,” he said. (In fact, as Santorum pointed out, recent national polling showed an overwhelming majority behind that stance.)

The former senator noted that he voted for minimum wage increases as a congressman and senator. Asked about labor issues more broadly, he said he has complicated feelings about the influence of unions in the private sector:

I think unions, historically, have been a part of civil society that have provided some benefits. They’ve also created a lot of abuse and a lot of problems and made us uncompetitive. … It’s not like I vote with the unions all the time, but I don’t go out and poke them in the eye. I don’t go out and say they’re horrible and we need to get rid of them. A lot of it is tone.

Still, don’t expect Santorum to soften his tone — or his stance — on the current Democratic proposals for a minimum wage of $12 or $15 per hour. He thinks those proposed rates are way too high.

Despite his minor deviations from Republican orthodoxy on labor issues, Santorum stressed that he’s hardly “a pro-union guy.”

The liberal New Republic magazine made the same point during the 2012 election, reporting that Pennsylvania union leaders “didn’t have many warm recollections about him to share”:

Perhaps the most damning indictment of Santorum’s popularity in Pennsylvania is his AFL-CIO scorecard. Though he voted with the union around 50 percent of the time in his first few years in Congress, by the end of his career he had accumulated a 13 percent lifetime rating.

The AFL-CIO didn’t respond to requests for comment on Thursday, but a blog post on the union’s website from last year suggests that its leaders aren’t satisfied with Santorum’s minimum wage position. Staff writer Kenneth Quinnell wrote that the AFL-CIO appreciates members of the GOP “pushing back against their fellow Republicans who oppose any minimum wage at all or any increase in the minimum wage.” However, Quinnell also called on these politicians to support the White House’s position on the issue, which was then a minimum wage of $10.10.