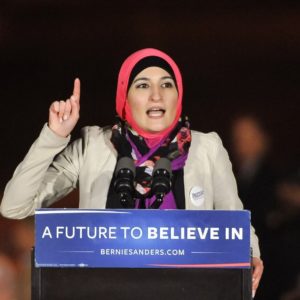 Sarsour and Duke, Kindred Spirits of the Worst Kind

Despite claiming to be a self-described opponent of  “white supremacy” and liberal social justice champion, prominent Islamist activist Linda Sarsour’s recent comments about Jews are identical to the sentiments promoted by white supremacist David Duke in his 2001 book “Jewish Supremacism: My Awakening to the Jewish Question.”

Sarsour was accused of anti-Semitism when a controversial video surfaced in which she asserted that Israel is “built on supremacy” and “on the idea that Jews are supreme to everybody else.”

The video was met with public outrage before being quietly deleted. Sarsour elaborated on her statements in a twitter thread apologizing “for the confusion.” She then doubled down arguing again that the state of Israel “operates on a supremacist system.”

Sarsour and Duke have been in agreement before. In 2017, Duke re-tweeted a statement by Sarsour about dual loyalty — the anti-Jewish trope accusing Jews or supporters of the Jewish state of being disloyal citizens with a hidden Jewish agenda.

So similar are their perception of Jews and Israel that in 2018, writer and activist Hen Mazzig tweeted a series of statements made either by Duke or Sarsour and encouraged his followers to guess “Who Said It,” demonstrating Duke and Sarsour’s rhetoric is indistinguishable.

Putting the Israeli-Palestinian conflict in the context of “Jewish supremacy” is manipulative and ahistorical. The reality is Jews are, and have always been, the arch-victims of supremacists. Sarsour is part of a network of Islamists and far-left fellow travelers who flip this reality by arguing that Jews are the new supremacists, allowing the Islamist crowd to present as persecuted victims, winning over converts to delegitimatize and destroy Israel.

To support her narrative of Israel as supremacist state, Sarsour propagates inaccuracies and paints a distorted picture of events. She oversimplifies a multi-layered conflict into a Manichean struggle between good and evil. She is interested only in sensationalism and anti-Israel polemics, not nuanced analysis.

Sarsour claims that “Palestinians & other minorities” are “treated as second class citizens” and misrepresents Israel’s 2018 Nation-State bill to make her case.Yet while Palestinian Arabs are certainly treated as second-class citizens in some Arab countries, in Israel proper they serve on Israel’s supreme court and in its parliament, and enjoy the same medical and social benefits as Jews.

Later in her thread, Sarsour claims, “Zionism is the dispossession, displacement and dehumanization” of the Palestinian people.

Ninety-five percent of American Jews identify as Zionists, yet many simultaneously support Palestinian self-determination and a two-state solution. When Sarsour argues that her problem is not with “the Jewish people,” she is gaslighting. Jews may not be hated for their religion or their race in this case, but instead for their political will and self-determination.

The difference between Duke and Sarsour is that the former is largely irrelevant in today’s society, pushed to the fringes. Sarsour, on the other hand, is a popular surrogate for a presidential candidate.

Islamists like Sarsour dazzle their audiences, not with substance forged by fact but with passion. Mesmerizing one’s audience with rhetoric to cover up the lack of factual depth has been immensely successful at concealing anti-Semitism.

Just as no one is worried about “offending” white supremacists, we must loudly confront Islamist anti-Semitism without fear of being called Islamophobic. There cannot be different standards for Jew hatred depending on who the hater is.

Sarsour’s demonization of Zionists creates a twisted irony. In equating Jews to white supremacists, Sarsour lands herself firmly in the company of the latter. Islamists and white supremacists are joined at the hip as sinister ideological bedfellows; kindred spirits of the worst kind.