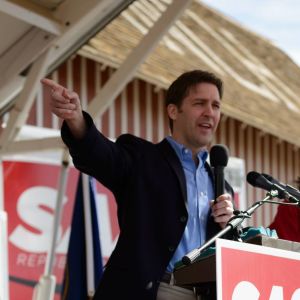 NATIONAL HARBOR, Md. — It’s been quite a week for Sen. Ben Sasse, R-Neb. The first-term lawmaker grabbed headlines with his Sunday Facebook post, describing in detail why he’s pledging not to vote for controversial Republican presidential front-runner Donald Trump.

Point by point, Sasse ran down the business mogul’s affronts to limited government and the first amendment, writing that “conservatives will need to find a third option” if Trump is the Republican candidate this fall. The senator took his message to CNN, MSNBC and talk radio. The conservative website RedState cheered “the first elected Republican to join the #NeverTrump movement.” He was, on Capitol Hill, a one-man resistance.

On Thursday, Sasse made his case at the annual Conservative Political Action Conference just outside Washington, D.C. Referencing the GOP field of White House hopefuls, he asked, “Do you hear a champion, not of tearing more things down, but of building America back up? Because I am anti-establishment, but what we need most of all is not just someone who wants to breathe fire on Washington but wants to breathe passion into our children for a constitutional recovery.”

The senator then took a direct shot at Trump’s campaign slogan as he concluded his speech, saying “classical conservatism” is “how we will actually make America great again.” He walked off stage to healthy applause from the crowd.

At 44, Sasse isn’t a household name in most of America, but the articulate former college president is a rising star on the right, winning rave reviews from activists, media personalities and think tank scholars. Some even see him helping save the conservative movement, now imperiled by Trump’s authoritarian, big government populism.

“If he decides to stay in politics, he’s the future of the Republican Party,” American Enterprise Institute president Arthur Brooks said on Glenn Beck’s radio show in October. “He’s not an anger guy. He’s not an envy guy. He’s an aspiration guy. He’s somebody who truly understands what it means to be a happy warrior.” (Later in the segment, the host called Sasse one of his favorite senators, imploring him, “hang on to your soul, because you’re really, truly one of the good guys.”)

Sasse won his Senate seat in a 2014 landslide, carrying every county in Nebraska. Before that he ran the once-struggling Midland University, overseeing “perhaps one of the greatest comeback stories for a small, private college,” according to the Associated Press. The transformation included expanded extracurricular activities and greater academic rigor, both of which helped the Lutheran school grow and stabilize its finances.

Of course, it’s no surprise that Sasse, whom the Atlantic dubbed “the Senate’s most interesting egghead,” thrived in academia. After attending public high school, he was accepted to Harvard, and he went on to earn a doctorate in American history from Yale. Like his political ally and fellow Harvard graduate, Sen. Ted Cruz, R-Texas, he did it all without adopting any of the schools’ reputed liberalism.

Today Sasse scores 92 percent — a solid A — on the Conservative Review scorecard. He gets 93 percent with FreedomWorks and 95 with Heritage Action. He touts the same “constitutional conservative” approach embodied by the likes of Cruz and Sen. Mike Lee, R-Utah.

And that’s part of what Sasse must hate about Trump. To him, the former reality television star isn’t just a general election disaster waiting to happen. He’s a traitor to the political cause — a man without conviction who’d cut deals with Democrats and utterly forsake the true believers.

“I don’t think this guy has any more core principles than a Kardashian marriage,” the senator said on MSNBC.

Sasse’s denunciation of Trump on Facebook was all about principle. He argued political parties are meaningless unless they represent a set of values, criticized Trump’s talk of a presidential “reign,” and condemned his failure to denounce the Ku Klux Klan. The senator also stood up for journalists, highlighting the mogul’s multiple threats against press freedom.

Yet when Trump racked up more primary victories on Super Tuesday, Republican voters didn’t appear moved by these principled pronouncements from an earnest egghead. Maybe resistance, as the saying goes, is futile.