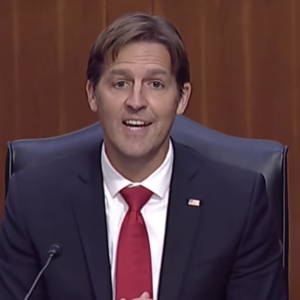 The following is excerpted from Nebraska Republican Sen. Ben Sasse’s opening statement at the Senate Judiciary Committee’s hearings on the confirmation of Judge Amy Coney Barrett to the U.S. Supreme Court.

I just want to say that Senator Klobuchar said a number of things about COVID that I agree with. She cited a bunch of really painful stories in Minnesota, and similar stories could be told from across the country. I even agree with parts of her criticism of the mismanagement of COVID by Washington, D.C.

I don’t know what any of that has to do with what we’re here to do today.

Huge parts of what we’re doing in this hearing would be really confusing to eighth-graders. If civics classes across the country tuned into this hearing and tried to figure out what we’re here to do, then they’ve heard about the 2009 Finance Committee debates over what should be in a healthcare reform package.

I’d like to distinguish first between civics and politics, because there was a time, the chairman said at the beginning of this hearing, when people that would be as different as Ruth Bader Ginsburg — and she was a heroic woman, that’s absolutely true — and Antonin Scalia — another brilliant mind and your mentor — could both go through the Senate and get confirmation votes of 95 or 98 votes.

Civics is the stuff we’re all supposed to agree on, regardless of our policy views differences. Civics is another way we talk about the rules of the road. Civics 101 teaches that Congress writes laws. The executive branch enforces laws. Courts apply them. None of that stuff should be different if you’re a Republican or a Democrat, or a libertarian or a Green Party member. This is basic civics.

Civics is the stuff that all Americans should agree on, like religious liberty. People should be able to fire the folks who write the laws, and voters can’t fire the judges. Judges should be impartial. This is just civics 101.

Politics is like if I look at my friend, Chris Coons, and I say, listen up, jack-wagon: “What you want to do on this particular Finance Committee bill is going to be way too expensive and might bankrupt our kids.” Or if Chris looks back at me and says: “Listen up, jack-wagon, you’re too much of a cheapskate, and you’re under-investing in the next generation.”

That’s a really important debate. That’s a political debate. That’s not civics. Civics is more important than that. Civics doesn’t change every 18 to 24 months because the electoral winds change or because polling changes.

We should not view judges as politicians who hide behind their robes. The antidote to judicial activism is originalism. Originalism is basically the old idea from eighth-grade civics that judges don’t get to make laws. Judges just apply them.

An originalist comes to the court with a fundamental humility and modesty about what the job is that they’re there to do. An originalist doesn’t think of herself as a super-legislator whose opinions will be read by angels from stone tablets in heaven.

Judicial activism, on the other hand, is the bad idea that our judges’ black robes are fake. That they’re wearing red or blue partisan jerseys under their robes. We should reject all such judges.

And so today, when we have a nominee before us, we should be asking her questions that are not about trying to predetermine how certain cases will be judged.