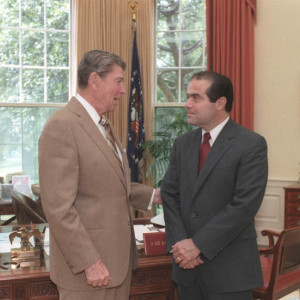 The death of U.S. Supreme Court Justice Antonin Scalia is a personal tragedy for his loved ones and a loss for any and all who love liberty.

While Scalia’s time serving on the Supreme Court influenced a wide range of issues, his critical analyses and carefully crafted opinions on environmental issues had an outsized impact on environmental policy and law. Scalia’s vote was often the difference between protecting individual liberty against attempts to expand government power and rulings that would have imposed the misanthropic wishes of radical environmentalists on the public.

Scalia was not opposed to environmental protection, but he also didn’t believe the environment was a sacred cow that must be protected or promoted at the expense of other legitimate societal goals or, more importantly for Scalia, by ignoring the limits placed on government by the U.S. Constitution and the actual wording of environmental laws.

During his nearly three decades on the court, Scalia helped define and delimit the concept of standing in environmental cases; he made clear regulations or laws that reduce or destroy property rights or property values to protect environmental goals amount to takings, meriting compensation; and he established in many instances costs have to be considered when writing environmental rules.

In three important majority opinions, beginning with Lujan v. Defenders of Wildlife (1992), Scalia established strict limits on when environmental groups can claim standing to challenge or enforce environmental laws or regulations in court. “Standing” refers to whether the party bringing a lawsuit can show it is directly “injured” by the actions of another party. Establishing standing is a critical legal hurdle in environmental cases, and before Scalia’s Lujan decision, there was no definitive standard for how to establish standing in these cases.
Scalia’s deft and ultimately persuasive analysis of what it takes to establish standing put an end to federal courts simply assuming environmentalists were harmed when a law or statute wasn’t enforced in a way they said it should be.

Scalia proved to be a stalwart defender of property rights. In his opinion in Nollan v. California Coastal Commission (1987), Scalia wrote California had to compensate coastal property owners if it wished to force them to maintain pathways for the public to access beaches. In Lucas v. South Carolina Coast Council (1992), Scalia clarified and expanded the idea of a “regulatory taking,” which is a regulation that limits a property owner’s use of his or her property or diminishes the value of the property so severely, it amounts to a government taking, similar to an exercise of eminent domain to promote a public purpose, and therefore warrants compensation.

Writing for SCOTUS in Lucas, Scalia determined because a South Carolina law aimed at protecting barrier islands from erosion prevented a landowner from building houses on his property, it effectively rendered the property valueless, amounting to an unconstitutional taking.

A majority decision written by Scalia overturning the Environmental Protection Agency’s (EPA) Mercury and Air Toxics (MATS) rule in 2015 made it clear costs imposed by environmental regulations should be a consideration when determining whether rules are reasonable. In his majority decision in the MATS case, Scalia wrote, “EPA strayed well beyond the bounds of reasonable interpretation in concluding that cost is not a factor relevant to the appropriateness of regulating power plants. … It is not rational, never mind ‘appropriate,’ to impose billions of dollars of economic costs in return for a few dollars in health or environmental benefits.”

If President Barack Obama fills the vacancy on the Supreme Court left by Scalia’s death with a justice who promotes radical environmentalism, instead of defending individual liberty, the bulwark Scalia built up against overweening government regulations aimed at promoting some ideal of environmental purity will be eroded, and the nation will be much worse off for it.

Today, the United States remains on the edge of a regulatory abyss, and Scalia’s steady hand is no longer firmly on the tiller. I didn’t know Justice Scalia, but I mourn his death and will miss his presence on the nation’s most important court.

Let’s hope the individual who fills his seat will be as committed to the cause of liberty—secured by the Constitution, which establishes a federal government of extremely limited powers—as Scalia was.