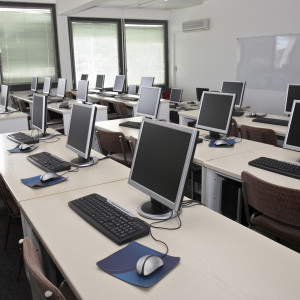 Schools and Universities Must Make Cybersecurity Education a Priority

Posted to Technology May 04, 2016 by Dean Chambers

Cyber-attacks have increasingly become the chosen method of attack against the United States by enemies of our country. Yet despite this, our efforts to educate students to prepare for careers as computer experts are severely lacking. Our schools and universities must embrace change immediately to begin preparing more of our young people to fill the roles needed to defend our national security from cyber-attacks from threats coming from China, Russia, North Korea, and other countries. More than 209,000 cybersecurity jobs in our country are unfilled, and the number of postings for such jobs has increased 74 percent in the last five years. This is expected to grow another 53 percent by 2018.

Most universities are also failing in this area, earning a grade of ‘F’ in cybersecurity educations, according to a CloudPassage study, which found that only three computer science programs among the top 121 universities in the country require students to complete three or more cybersecurity courses to graduate.

Our current and future students will have many jobs in cybersecurity available to them if they get the right education to prepare for these careers. And our country will need these students as well.

“The number of jobs in information security is going to grow tenfold in the next 10 years,” said Virginia Lehmkuhl-Dakhwe, director of the Jay Pinson STEM Education Center at San Jose State University, which mentors youth to enter and excel in STEM (science, technology, engineering and math) careers. “We have to do much more if we want to meet that demand, at the university level as well as K-12.”

The need is only growing and the challenges we face in cybersecurity are rising as well. The enemy is getting far more advanced in their cyber-attacks while our schools and universities have continued to fall behind in preparing students for careers in cybersecurity. As the gap between the sophistication of the cybercriminals and those trained to thwart them grows, it only highlights the degree to which we are falling further behind and need to rapidly upgrade computer science and cybersecurity education at the K-12 level, as well as at our universities.

“The sophistication of the technology and tactics used by criminals has outpaced the ability of IT and security professionals to address these threats,” according to a Cisco report on the cybersecurity talent gap.

Schools and universities have been slow to change and meet the country’s needs for highly educated and trained cybersecurity professionals, and the time is past due for major improvements in computer science education in general and cybersecurity in particular. Cybersecurity is a key part of national security, and government at all levels, including the federal government, have a constitutional duty to defend and protect our national security against all enemies foreign and domestic, including the threats from cyber-attacks. Computer science programs need to be updated and upgraded, and most students need to be given incentives, including grants and scholarships, to enroll in and complete computer science and cybersecurity studies.

Dean Chambers is an independent journalist and blogger who has written news and commentary articles on a wide variety of subjects. His articles have been published on Examiner.com, The Inquisitr, Conservative Firing Line and have been featured on The Drudge Report, The Rush Limbaugh Program, The Blaze and The Gateway Pundit, as well as parodied by Stephen Colbert, Chris Matthews and Rachel Maddow.