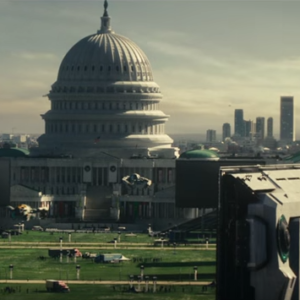 Ahead of Summer Sci-Fi Movies, Policy Wonks Space Out in D.C.

Memorial Day arrives Monday, and with it the unofficial start of summer. As always, the season will bring blockbusters back to movie theaters, including those thrilling space epics that transport us out of this world.

This year, though, Washington isn’t waiting for June’s “Independence Day: Resurgence” or July’s “Star Trek Beyond” to imagine our futuristic life among the stars. Whether it’s planning voyages to Mars, extracting policy proposals from science fiction or learning political lessons from “Star Wars,” Tuesday was proof positive that D.C. is spacing out already.

First, there was the morning event at the Center for American Progress, where NASA astronaut Catherine “Cady” Coleman hyped “something which we think is inevitable, and that is leaving our planet, journeying to another place, mostly likely Mars, and living there and staying there.”

Coleman screened her own movie of sorts — a video highlight reel from her journey to the International Space Station — and talked about the work astronauts are already doing to prep a visit to the red planet.

Beyond building robots to accompany humans on the trip, she said, “We’re learning how to recycle our air, recycle our water, grow plants in places where it’s difficult to do so.” That last goal called to mind Matt Damon gardening in “The Martian,” last year’s Ridley Scott film based on Andy Weir’s novel of the same name.

The connection between science fiction and the reality of our future was even more evident Tuesday night at the New America Foundation, where bestselling author Charles Stross talked about the question, “What Can DC Learn From Sci-Fi?” He mused on artificial intelligence, automation and loss of privacy, but some of his most dire comments addressed the consequences of climate change and subsequent scarcity of resources.

“Before too many more decades are out, large chucks of this planet are going to be uninhabitable without high technology,” he said. “We’re going to be having water wars and food wars, as we’re seeing in the Middle East. This, in turn, is going to drive paranoia about immigration and racism in the developed world.”

Part of Coleman’s argument for a Mars mission is that the scientific developments required would also aid sustainability on Earth. That’s why she’s so committed to convincing children in grade school today, members of what she calls “the Mars generation,” to be part of the effort.

“They have to really understand that they have that destiny,” she said, sounding just like a Jedi master urging on apprehensive Padawan learners in “Star Wars.”

Though Coleman didn’t explicitly mention that iconic space saga in her presentation, she did stress that much of science fiction is helpful in inspiring the astronauts of tomorrow.

“We got 18,000 applications for the astronaut program this year, and I think that some of these movies are responsible for that,” she said.

“Star Wars” burst back onto the scene in December with “The Force Awakens,” and a spin-off film, “Rogue One,” is due this Christmas. Moreover, Disney expects a new movie for the franchise every year going forward.

In the meantime, next week will see the publication of “The World According to Star Wars,” written by the Harvard professor and former White House regulatory czar Cass Sunstein. The book got a good review Tuesday from “Star Wars 7X7,” billed as the only daily podcast about the franchise.

According to Sunstein, an expert on behavioral economics, the stories of “a galaxy, far, far away” are instructive on “the dynamics of political revolutions.” Speaking at Harvard in a talk posted to YouTube, the professor said heroine Leia Organa represents the political leader of “A New Hope” — the natural revolutionary activist. Heroes Luke Skywalker and Han Solo, meanwhile, have to be convinced to join her cause, persuaded by various personal incentives. There’s also the case of Palpatine, the villainous politician who orchestrates his own political revolution against the Galactic Republic to become emperor.

A noted liberal, Sunstein will discuss his book next month at the conservative American Enterprise Institute. It goes to show that, even in our age of polarized politics, lightsabers and laser blasters keep bipartisan support.