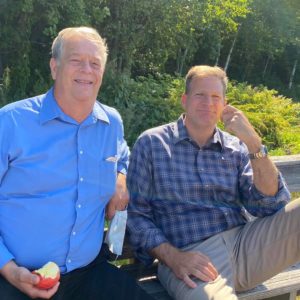 On Tuesday, New Hampshire politicos will be scoring the “Sununu Primary.”

No, not the GOP gubernatorial primary featuring the incumbent governor, ReOpenNH activist Karen Testerman and Nobody (yep, Keene’s most notorious former jailbird/current cannabis advocate is on the NHGOP gov ballot for maximum confusion.)

There’s another election contest N.H. political insiders are watching: How Sununu-backed candidates do in their primary contests.

Across the border in Massachusetts, a PAC with ties to Gov. Charlie Baker had a good night last Tuesday when 19 of the candidates it backed won their primaries. Then again, 18 of the 22 candidates it supported were Democrats. (Mass. GOP sources tell NHJournal this is an accurate reflection of just how “Republican” Gov. Baker actually is.)

Gov. Sununu has kept his endorsements on the GOP side of the aisle, and the most interesting one is his support for a candidate running against an incumbent Republican state senator.

“No one works harder than Erin to help businesses, large and small, through these very challenging times and back to a thriving economy. I urge the citizens of the North Country to vote for Erin Hennessey for state senator,” Sununu said in a statement.

So, why would Sununu be backing a challenger against a Republican who already holds the seat? Perhaps because Sen. Starr, aka “The Accidental Senator,” was an unknown, under-funded 75-year-old longshot two years ago when incumbent Democrat Jeff Woodburn’s candidacy collapsed under domestic violence charges.

Rep. Hennessey is younger, more dynamic and could conceivably hold the seat for years to come. She’s also more moderate on social issues (Cornerstone gives her a rating of just 69), which might be an advantage in the general election. This is an investment of Sununu’s political capital today to help his party in the future, something many NHGOPers would like to see more of.

The most complaints New Hampshire GOP activists make regarding Gov. Sununu is that he doesn’t do enough to build the party or support Republican candidates. The party is struggling financially, and the list of compelling future candidates on the GOP bench is extremely short.

Sununu supporters push back, saying Sununu does everything he’s asked and works closely with the NHGOP. But it’s hard to make the case that the Republican Party in New Hampshire has prospered during the Sununu years.

And while Sununu won re-election in 2018 by a solid seven points, his party was trounced in the legislature, losing control of both the House and Senate. Sources say Sununu has committed to stepping up his efforts this campaign season, particularly on behalf of state senate candidates.

And Sununu has endorsed outspoken social conservative Dave Wheeler in the Executive Council District 5 primary. Wheeler’s facing off against former state senate majority leader Bob Clegg, who has the backing of some of the legislators who work closely with Sununu.

The race has been one of the most openly negative, and while Sununu made an appearance with Wheeler on Friday, he’s stayed out of the back and forth of the campaign.

Sununu has also backed state senate candidates Denise Ricciardi in District 9 and Jason Syversen in District 16, neither of whom have a primary opponent.

The NHGOP insiders NHJournal talked to say these endorsements are low risk for Sununu.

The swing voters he needs in November don’t care, and the party faithful are happy to see him engaged.  And as for the struggles of the NHGOP since 2016, they are more likely to be blamed on President Trump — who remains underwater with New Hampshire voters — than the popular incumbent governor.