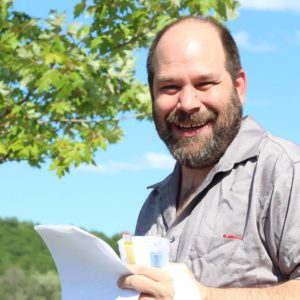 If ‘Nobody’ Is Getting Your Vote for Governor, He’s Grateful for Your Support

He may be a “Nobody” running for governor, but don’t call him a fringe candidate.

Nobody, formerly known as Rich Paul until last year, said his new name is a message “because a lot of the jobs in government, nobody should do.” When asked to respond to critics who call him a fringe candidate, Nobody responded that “the mainstream has gone completely out of its mind and anybody ‘sane’ is now on the fringe.”

Before running for governor, Nobody unsuccessfully ran for mayor of Keene. According to his campaign website, he only got about 2 percent of the vote, which he took as a sign that “clearly the good citizens of Keene would prefer I be governor.”

Nobody is in a three-way GOP primary race with incumbent Gov. Chris Sununu and longtime GOP activist Karen Testerman. With or without the eyebrow-arching name, Nobody faces long odds trying to take down Sununu. According to recent polls, Sununu enjoys 80 percent support from New Hampshire Republicans and is expected to win the primary handily. The primary is set for Sept. 8.

In 2013, Nobody (still Rich Paul at the time) was at the center of a high-profile drug trial that received national attention in which he faced the possibility of serving 81 years in prison for selling marijuana.

According to the New York Daily News, Nobody has spent 60 days behind bars over 11 charges related to disorderly conduct and narcotics. Most recently, Nobody has been charged with felony possession of a weapon, a machete, which Nobody got back, according to a video on his website.

New Hampshire politics is currently being roiled by the same protests seen across the country in response to the deaths of George Floyd, Breonna Taylor and Ahmaud Arbery — calling for racial justice and police reform. Floyd was murdered by a Minneapolis police officer, Taylor was shot and killed in her home by police in Louisville, Kentucky, and Arbery was murdered while jogging in a white neighborhood in Brunswick, Georgia.

Their deaths, and others, have forced a public reckoning on the issue of racism in the United States with protests in both major cities across the country as well as small towns like Rochester and Merrimack, N.H. According to a poll by the Kaiser Family Foundation, about 11 percent of American adults have participated in at least one protest.

Among their ranks was Nobody, who said he has participated in several Black Lives Matter protests in the Granite State.

When asked about his thoughts on the movement, Nobody acknowledged that, early on, he believed Black Lives Matter should “drop the qualifiers.” Now he says he has learned that “black lives have not been treated like they matter so it’s worth a little extra emphasis.”

Though he does not believe that it is the government’s duty to tell the people what they can and cannot think, he does believe that “any official mistreatment… by the government is unacceptable and has to be rooted out.” Additionally, as governor, he would be “utterly intolerant of police brutality, regardless of the race of the victim.”

Nobody, who described himself as part of the Libertarian Free State movement on his campaign website, has joined protests against Sununu’s stay-at-home order as well.

Nobody says Gov. Sununu does not have the “moral authority” to make such an order and “what legal authority he has is anybody’s guess. They don’t really pay too much attention to the constitution anymore.”

Though he conceded that the coronavirus is a threat to New Hampshire, he believes that “overreaching government is a bigger threat.” As of June 24, coronavirus has claimed 347 lives in the Granite State, according to the N.H. Department of Health and Human Services.

If elected, Nobody vowed to “pardon every victimless crime in New Hampshire history,” including “drug possession, drug sales, prostitution, gambling, …[and] tax evasion,” among other things.

On his website, Nobody called the war on drugs “a human rights nightmare… [that] was created by the Nixon administration for the purpose of suppressing two cultures that Nixon considered to be enemies: hippies, and blacks.”

Finally, Nobody told NHJournal that an important priority of his administration would be to “shrink government as much as I possibly can.”

David Micali is a student at Saint Anselm College which includes the New Hampshire Institute of Politics. He currently writes for NHJournal.