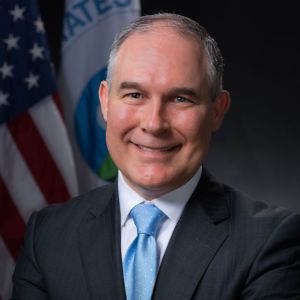 The final day of the Environmental Council of States conference culminated in a keynote address by Environmental Protection Agency head Scott Pruitt. It was a time for Pruitt to reassure the states about EPA’s goals under the new president and to hear concerns from council members. Although panel discussions earlier in the week had addressed infrastructure spending and details of American water systems, Pruitt’s talk emphasized themes more often discussed in constitutional law classes: the rule of law, cooperative federalism, and the rulemaking process.

“For the last several years that confidence in the rule of law has been put in doubt,” said Pruitt, who described how EPA regulations under the Clean Air Act grew ten-fold under President Obama. As federal regulations expanded so dramatically, they increasingly cut into the role played by the states.

As the number of regulations soared, it became increasingly difficult for businesses and individuals to know which rules they were being governed by and how to ensure they were in compliance with the laws. Pruitt called this “regulatory uncertainty” an impediment to economic growth and development.

“Rule of law does matter because it provides clarity to those you are regulating,” Pruitt said. To fix this problem, he spoke of changing the EPA’s internal processes to include comments from states and industry, instead of using the courts and agency directives to pass rules. In short, the days of the pen and the phone are gone.

In practice, this approach will draw on the states to play a much larger role in determining how the EPA should allocate its resources. Here Pruitt’s speech echoed comments made by ECOS panelists yesterday, who discussed ways for the EPA and states to work together to ensure that personnel were not wasted in needless duplication. Pruitt called the approach “cooperative federalism,” and spoke of allowing states and industry partners to help the EPA determine policies and approaches that worked, rather than forcing a top-down, one-size-fits-all policy.

Although many in the audience were no doubt encouraged by Pruitt’s willingness to allow the states greater latitude to develop their own policies, not everyone was pleased. Hecklers tried to disrupt the speech at one point by attempting to shout questions to Pruitt about clean drinking water in cities while he was talking. Unfazed, he continued to speak, but several lines of his speech were difficult to hear. Security quickly escorted the women out of the room.

Afterward, Pruitt made light of the situation, saying that, “This is something, like in a baseball game, that sometimes happens.”

In fact, many of the issues Pruitt addressed were concerns that ECOS members had discussed, including the need to renovate America’s aging water and sewer infrastructure, and ways to expedite the permitting process to allow new construction projects to begin. Pruitt agreed with the representatives and discussed how the Trump administration was moving to set up task forces to focus on improving the permitting process for state, local, and tribal-level water projects.

“The infrastructure discussion is not just about roads and bridges,” agreed Pruitt. “It is about water issues.”

Speeding up the process would create tangible benefits for states and local communities. Throughout his speech, Pruitt focused on changes like these, where progress could be seen in the numbers. One specific area was Superfund sites. There are currently more than 1,300 Superfund sites around the country, including some that have been included on the list for 30 to 40 years.

Already, his office has meetings with twenty state governors to discuss ways of cleaning these sites.

“We need to set clear benchmark objectives that we want to achieve in each of these areas,” said Pruitt.

It’s a phrase that he could have applied to many of his suggestions. However, with clear benchmarks and a commitment to the rule of law, the EPA is trying to achieve its goals of cleaner air and water, while also encouraging growth and development.