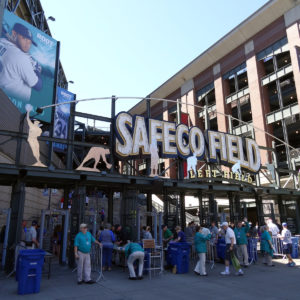 SEATTLE - JUNE 26: People enter into Left Field Gate to Safeco Field in Seattle in June 26 2016. Home of the Seattle Mariners
[IS] Opinions

Posted to Politics October 26, 2018 by Michael Farren and Anne Philpot

These days it’s hard to read the sports pages without a dose of business news. From D.C. to Vegas and L.A., the same story plays out over and over: Teams extract millions in public funding for stadiums through a high-stakes game of public relations posturing, shaky economics and political influence peddling.

For a perfect illustration of what’s wrong — and for some hope — look to two new stadium deals in Seattle.

In September the King County Council approved a $135 million subsidy to spruce up Safeco Field, home of Major League Baseball’s Mariners, in a contentious 5-4 vote. A new civic organization, the Citizens Against Sports Stadium Subsidies, quickly filed paperwork that could allow voters to overrule the council in a referendum.

Meanwhile, the council approved a different deal, this one geared toward securing a National Hockey League franchise. The KeyArena plan is a refreshing departure from America’s typical taxpayer-funded stadium scheme.

Handing the Mariners $135 million is equivalent to a $162 tax on every household in King County. That’s mildly outrageous considering many won’t ever set foot in the stadium. A full accounting would include hidden costs, too. The original stadium deal made Safeco Field publicly owned so that the Mariners would not have to pay $6 million in annual property taxes.

More important, any funding dedicated to the Mariners puts entertainment luxuries above civic needs. The council rerouted the money from a fund for affordable housing, arts and tourism marketing. King County could instead use the cash to boost affordable housing funding by 19 percent. The lost $6 million in annual property taxes would be enough to fund 27 new Seattle police officers, 54 new public school teachers, or help expand the city’s strapped bus service.

While the subsidy is funded by hotel taxes that traveling fans would help pay, it doesn’t even come close to paying for itself. That would require over 33,000 visiting fans to attend every Mariners’ home game — more than their average total attendance last season — and spend at least $100 at local hotels.

Perhaps the most flabbergasting thing? The Mariners would only need to charge actual fans — rather than taxpayers — an extra $2.50 per ticket over the 25-year life of the subsidy. This makes far more economic (and ethical) sense, since a product’s price should reflect the full cost of providing it.

The vast majority of academic studies show that stadium construction and renovation don’t broadly improve economic growth or community welfare. Locals don’t spend more money, they simply shift where they spend it. After all, consumers’ budgets don’t magically inflate when a new team comes to town.

It comes down to picking winners and losers. Teams, sports bars and ballpark-area businesses win. The smaller restaurants, concert halls and clubs who pay higher taxes to fund their entertainment industry competitors lose.

The subsidy stands in stark contrast to the council’s unanimously approved agreement with the Seattle Arena Company to redevelop KeyArena. This taxpayer-friendly plan uses $700 million in private funding and relatively few public subsidies. It’s a step in a much better direction.

So it’s a tale of two stadiums. Both were built with public funds, but while one underwrites private profits and makes professional sports a publicly funded service, the other charts a new course that leaders in other cities should watch closely.

Team owners know that it’s easier to sway politicians, who stand to gain political influence from adoring fans, than it is to win a public referendum. Nearly 70 percent of voters across the country oppose stadium subsidies. After months of political controversy, Seattle area voters may have their say. Will the rest of us pay attention?