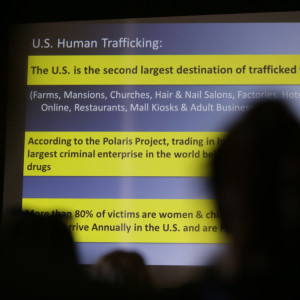 In this Tuesday, Jan. 12, 2016 photo, members of the industry group Club Owners Against Sex Trafficking attend a presentation given by a U.S. Department of Homeland Security agent teaching owners of strip clubs and strippers how to spot sex traffickers, at the Burbank Community Services Building in Burbank, Calif. (AP Photo/Damian Dovarganes)
News

The Senate voted unanimously Thursday to hold the CEO of a classified ads website used for sex trafficking in contempt for failing to appear before a committee, the first time the upper chamber has taken such action in over two decades.

Senators voted 96-0 to hold Backpage.com CEO Carl Ferrer in civil contempt for failing to appear before the Senate Homeland Security and Governmental Affairs Subcommittee on Permanent Investigations in November, and for failing to cooperate with an investigation into the site’s purported use by child sex traffickers.

“Senator McCaskill and I gave Backpage every opportunity to cooperate in good faith with our investigation,” subcommittee chairman and Ohio Republican Sen. Rob Portman said Thursday. “We carefully considered its objections to the subpoena and issued a 19-page opinion overruling those objections and directing Backpage to comply. It continued to stonewall.”

McCaskill and Portman spent the last year investigating online sex trafficking, uncovering along the way emails revealing Backpage outsourced its ad screening to India between 2010 and 2012, where moderators removed words, phrases and images that would have flagged ads for removal and potential reporting to authorities.

One such email sent from Backpage’s California headquarters instructed moderators to “ONLY DELETE IF YOU REALLY VERY SURE PERSON IS UNDERAGE,” and if in doubt, “accept the ad.”

“And then they would post this ‘sanitized’ version of the ad,” Portman said. “While this editing changes nothing about the underlying transaction, it tends to conceal the evidence of illegality.”

Ferrer failed to appear before a panel in the upper chamber last year after his lawyers repeatedly tried to have Ferrer excused, explaining he would only plead his Fifth Amendment right not to self-incriminate. Days before the hearing Backpage attorneys said Ferrer would be traveling out of the country on the day of the hearing, and that he would not appear — a move Portman described at the time as “a clear act of contempt.”

“We had hoped Mr. Ferrer would be here, but he has refused to come. This is truly extraordinary,” Portman said during the November hearing. “This subcommittee would respect any valid assertion of Fifth Amendment privilege, but there’s no privilege not to show up.”

Before the hearing Backpage lawyers told Portman the site neglected to search for documents subpoenaed by the committee. Witnesses testified not only was Backpage reticent to remove sex ads featuring underage children — in numerous cases verified by their own parents — the site’s policies were reportedly manipulated to protect such ads.

“Even when an escort ad is reported by families as containing images of their child, Backpage often does not remove the ad from public view,” an attorney for the National Center for Missing and Exploited Children said. “Instead, the reported ad remains live on Backpage.com where potential customers can continue to purchase the child for rape or other sexual abuse, even though Backpage is now on notice that the ad potentially involves a child.”

According to NCMEC, 71 percent of all child sex trafficking reports submitted by the public are tied to Backpage ads. An industry analysis from 2013 found $8 out of every $10 spent on commercial sex advertising online in the U.S. goes to Backpage, which reported more than $130 million in revenue last year.

Anti-trafficking organization Shared Hope International reports between 80 to 100 percent of their clients have been bought or sold on Backpage, documenting more than 400 cases across 47 states.

In a recent case brought against Backpage in Boston, the victim — a 15-year-old girl — was reportedly raped 1,000 times as a result of a Backpage ad.

“The public record indicates that Backpage sits at the center of the online black market for sex trafficking,” Portman said Thursday.

Advocacy groups and prosecutors testified despite Backpage’s claim to “lead the industry” in ad screening, the site has repeatedly refused to adopt practices and procedures to assist authorities, including retaining ad metadata, tagging uploaded photos for red flags and enforcing identification rules that apply to other ads, like requiring a phone number to sell a motorcycle.

“This will be the first time in more than 20 years that the Senate has had to enforce a subpoena in court,” Portman said. “I cannot think of a time it has been more justified.”

Last year Portman and McCaskill said they considered remanding Ferrer to the Justice Department for criminal contempt, but seemingly chose the civil route in the interim.

Thursday’s vote compels Backpage to hand over documents requested by the committee, which it previously refused on First Amendment grounds.