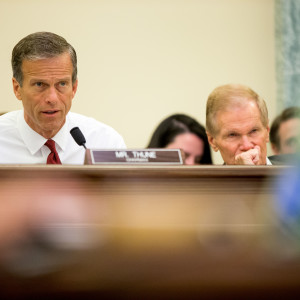 During an FCC oversight hearing in the Senate Commerce, Science and Transportation Committee — chaired by Thune — the South Dakota senator gave a self-described “hard hitting” opening statement, complete with a chart, counting off more partisan 3-2 votes at the five-commissioner agency during Wheeler’s tenure than the sum total of the last two decades.

“Chairman Wheeler has forced 3-2 votes on party-line items a total of 25 times,” Thune said. “To put that in perspective, in three years under Chairman Wheeler the FCC has seen nearly twice as many partisan votes than in the previous 20 years combined.”

While acknowledging bipartisan consensus isn’t always achievable, Thune accused Wheeler of using “the distribution of information about commission proceedings as a political weapon,” withholding information from the FCC’s two-Republican minority while timing leaks and disclosures to the media and advocates of the chairman’s position “to benefit the partisan agenda.”

“By relying on unnecessarily partisan tactics, Chairman Wheeler has, I believe, missed opportunities for bipartisan accomplishments,” Thune said. “Treating all commissioners fairly and not using the disclosure of nonpublic information as a sword would lead to a better process at the agency, which in turn could only improve the commission’s work product.”

Partisan votes advanced some of the biggest items the commission has seen, both under Wheeler and in the last decade as a whole, with varying degrees of success. While net neutrality — undoubtedly Wheeler’s landmark accomplishment and the agency’s biggest regulatory expansion since the internet age — survived a court challenge, other moves Republicans have decried as overreaches haven’t fared as well.

Earlier this year, federal courts struck down the FCC’s attempt to let municipal-run broadband networks expand outside of their territories to compete with private providers and lower inmate calling rates in prisons. Both outcomes were predicted by Republicans, who Thune warned could follow Wheeler’s example under a Republican administration and undo his legacy, setting the stage for a partisan regulatory back-and-forth that could stall the agency over the next several administrations.

“I haven’t done a box score — I presume that you did — but about 90 percent of the decisions that we make are unanimous,” Wheeler responded. “Some of those 3-2 votes were me voting against one or both of my Democratic colleagues.”

The chairman said 3-2 votes on issues like effective competition for cable and a plan to subsidize carriers to expand in rural Alaska were a mix of Republicans and Democrats voting with his position.

“This is a collegial body, this is a body where the deliberative process is important, and I too hope that we can find ways to resolve issues in a concomitant manner,” Wheeler said, adding there’s still time for Republicans and Democrats to work together on major proceedings the FCC will tackle before the end of the year, including privacy rules for internet providers and rewriting rules to lower the cost of high-capacity broadband for mobile carriers, ATMs, small businesses and other services.

Wheeler said commissioners still have two weeks left to compromise on a provision granting the agency power over copyright license sharing agreements in it’s proposal to make cable and satellite providers use apps instead of set-top boxes. During Thursday’s meeting both Republican commissioners and Democrat Jessica Rosenworcel said work still needs to be done on the licensing part of plan, scheduled for a vote during the commission’s Sept. 29 open meeting.

“The door isn’t closed, lets get at it,” the chairman said.

Thune pointed out Wheeler’s examples of compromise weren’t open meeting votes, where the commission votes on high-profile issues, and clarified he was referring strictly to open meeting votes — almost a third of which were 3-2 decisions during Wheeler’s tenure.

Republican Commissioners Ajit Pai and Michael O’Rielly have repeatedly expressed their dismay with being “shut out” of the deliberative process under Wheeler virtually since the chairman took the reigns of the agency in 2013. During Thursday’s hearing O’Rielly recalled how Democrat Mignon Clyburn was pressured at the last minute to back out of a compromise with Republicans to expand the Lifeline program earlier this year, delaying the commission’s open meeting until Clyburn eventually got back in line with Wheeler’s bloc of Democrats.

Pai recounted how in a strange rule reversal, Wheeler required all of the commissioners to unanimously agree to change decades-old rules barring broadcasters from owning newspapers in the same market, despite a majority of commissioners supporting a change.

“It was a rather odd situation, since we seemed to have an overwhelming bipartisan majority…that the rule in question…had long since outlived its usefulness,” Pai said. “The process is very strange to require unanimity on an issue when, as you pointed out in your chart, there are a number of high-profile issues where Commissioner O’Rielly and I in particular have suggested changes or made objections, and those are either ignored or dismissed out of hand.”

Republican lawmakers got at least one concession out of Wheeler without even having to ask, as they had during numerous hearings before, whether Wheeler intended to follow precedent and leave office in January with the exit of the Obama administration.

“As a certain November event approaches and a new administration is on the horizon, this may be my last appearance before this committee,” Wheeler said. “I will cooperate fully with the new administration to assure a smooth transition at the FCC.”