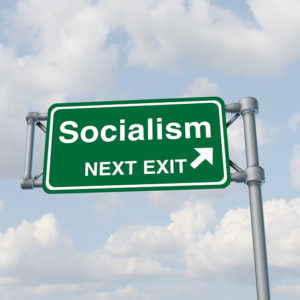 Senator Sanders, Mr. Trump and the Practice of Socialism

Sen. Bernie Sanders’ continued success in the polls seems to indicate once again that socialism, or some form of it, is on the rise.

Sanders makes no bones about it and is proud to call himself a democratic socialist.

By contrast, President Trump’s State of the Union address made it clear that he is no socialist, and he’s solidly opposed to a movement that would push our country in that direction: “Here, in the United States, we are alarmed by new calls to adopt socialism in our country. … Tonight, we renew our resolve that America will never be a socialist country.”

Even some Democrats like Speaker Nancy Pelosi, who later tore up a copy of his speech, applauded.

Trump’s strong assertion was most likely an effort to differentiate himself from Sanders’ and Sen. Elizabeth Warren’s eagerness to socialize some, if not all, of America’s healthcare. Trump’s statement leaves no doubt about where he comes down on the label of socialism — perhaps as a religion, worldview or way of self-identifying ourselves — but based on what we can see, he is not opposed to the actual practice of socialism.

Indeed, just two days after the State of the Union address, Attorney General William Barr, expressing concern over how to deal with the economic might of China’s Huawei Technologies in rapidly evolving 5G networks, indicated that the United States should consider taking a financial interest in telecom companies like Nokia and Ericsson. “Putting our large market and financial muscle behind one or both of these firms would make it a more formidable competitor and eliminate concerns over its staying power,” Barr argued.

Clearly, encouraging a large investment of U.S. taxpayer money in two non-U.S. firms and granting preferred access to the U.S. market qualifies as an endorsement of the practice of socialism (at least on a one-time basis).

Like many people in positions of power who wish to create a better world, Barr did not use the word “socialism.” Most likely, he’d never wish to have that label pinned on his lapel.

I’d venture to guess that if he were asked about his preference among economic systems, he, like his boss President Trump, would respond that he is a capitalist to the core. What Trump loyalist argues that you can make America great again by reverting to socialism?

This is the heart of the problem for those who worry about what some call “mission creep” over decades of American policy. We may start as a nation based on private ownership, free markets operating under a rule of law and a limited role for government.

And no matter how earnestly we identify with those ideals, we can still end up with a nation where vast sectors are owned or regulated by government, with only a limited role for markets.

But how does this happen? Nations don’t usually decide to completely turn on socialism — or turn off capitalism — for their entire economy. Generally speaking, we flip small switches off or on when individual policy choices are made. For example, our concern about the availability of student loans led recently to the nationalization of student lending. \

Worries about the strength and viability of the secondary home mortgage market led to the nationalization of that market. And now, deep concern about the affordability of health insurance and prescription medicine is fueling a critically important presidential debate about the relative merits of nationalizing those markets.

Life takes place at the margin. It is the next step, the next investment, the next decision that matters. And it is the cumulative effect of these moves that can yield extreme differences in outcomes across time.

This is not the time for the U.S. government to enter the 5G network business and practice more socialism. It’s the time to reassess and reverse activities that we have already socialized.