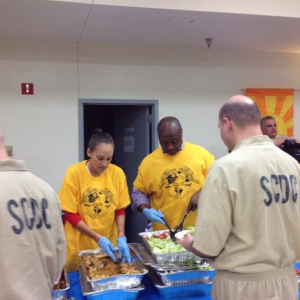 Sen. Tim Scott, R-S.C., serves lunch to prisoners and their children as part of a program sponsored by Proverbs 22:6
[IS] Opinions

Sen. Tim Scott Knows the Name of the Hate Game

Tim Scott, a U.S. Senator from South Carolina, last week found himself at the corner of exasperation and recitation. And it wasn’t a good locale.

Scott read aloud on the Senate floor samples of the vicious hate mail he has received in the aftermath of his public support for Jeff Sessions as U.S. Attorney General during the super-contentious confirmation hearings. Scott, the only black Republican in the U.S. Senate, recited the ugly names of hate:

—“Senator Tim Scott is not an Uncle Tom — he doesn’t have a shred of honor. He’s a house negro, like the one in ‘Django (Unchained).’’’

—“Mr Scott (is a) black man who is racist against black people. Big Uncle Tom piece of fertilizer.”

—“You are a disgrace to your race.”

—“How does a black man turn on his own?”

Scott added, “I left out all the ones that used the ‘n-word.’ Just felt like that would not be appropriate.”

Bottom line: The Tim Scott Syndrome is a classic example of someone targeted by what traditionally has been labeled as the “Negro Thought Police.”

What is that, you ask?

It’s that strident group of black so-called “thought-makers” whose sole purpose is to set the philosophical tone for ALL black folk in the United States. No deviation allowed.

We see and hear them almost daily, especially on news talk shows — the television mouths, such as the two reverends Al Sharpton and Jesse Jackson, and the two college professors, Michael Eric Dyson and Marc Lamont Hill. And there are plenty of other non-public figures who attempt to set the tenor of the times.

Remember, Hill is the political commentator on CNN who in January labeled black celebrities — including Steve Harvey and Jim Brown — who met with President Donald Trump as a “bunch of mediocre Negroes” who are being “used” and bring nothing to the conversation that helps black folk in general.

Hill’s comment is a vivid example of the “Negro Thought Police.”

That’s why ANY public-figure black person who openly supports Trump or any of Trump’s surrogates, such as Sessions, is bombarded with derogatory terms, such as “coon,” “Uncle Tom,” “house nigger,” “Oreo,” “black sambo,” “traitor,” “turncoat.” And there are worse terms during this era of historic intra-racial racism.

That’s the price you pay. Risky business, for sure.

This toxic air of public-reputation shaming is spreading like a California wildfire.

Any black person who engages with Trump is subject to incessant shaming on a national stage. Which is a ridiculous stance because, logically, what can black folk really gain by universally ignoring the president of the United States? Whether it be Trump, or Obama, or Reagan. No acknowledgement at all? Boycott the president? Come on.

Scott also discussed on the Senate floor how the definition of “tolerance” has devolved for the worst. Nowadays, “tolerance” means a certain faction of folk have the right to free speech, but anyone who disagrees with that certain faction is automatically deprived of certain inalienable rights. As in the right to speak … without criminal incident.

We saw that a couple of weeks ago when highly controversial, conservative Breitbart News editor Milo Yiannopoulos attempted to give a speech at the University of California-Berkeley, but was shouted down by student demonstrators who then proceeded to try to burn down the campus.

That disgraceful episode was similar to those stupid Donald Trump protesters who professed “tolerance” during Trump’s inauguration on Jan. 20, but then set a limousine on fire downtown Washington. A black stretch limousine they marked with a “Peace” symbol and the words “We the People” scrawled into its side; suffice to say, the hypocrisy in all this is mind-boggling. Ultimate irony.

Those incidents are the crux of Tim Scott’s concerns that so-called “tolerance” more closely resembles intolerance these days.

Even the president of the College Democrats of Maryland, Matt Teitelbaum, in an appearance on Tucker Carlson’s news talk show on Fox News Channel, conceded that he doesn’t agree with Yiannopoulos’ views, but he “will defend to the death his right to say it.”

Willie Huntley Jr., a black attorney in Mobile, Ala., knows how Scott feels. The whole world saw Huntley in January testify on Capitol Hill on national television on behalf of Sessions during the Senate confirmation hearings.

Huntley, a running back for Auburn University in the late 1970s, attended the Cumberland School of Law at Samford University in Birmingham, Ala. A former assistant U.S. Attorney under Sessions in Alabama’s southern district, Huntley now heads The Huntley Firm in Mobile.

Huntley, like Scott, received the usual racial hate on social media. It’s essentially a ritual for a black person offering heartfelt aid publicly to anyone in the Trump administration. Basically a rite of passage on Twitter, etc.

“I was called a coon or an Uncle Tom and all that,” Huntley told InsideSources. “But I’ve been called worse than that. You know what the worst thing anybody can call me? That I was unprepared for court. I’d probably stay in bed for a week if somebody said I wasn’t prepared.”

Still, when it comes to the vicious name-calling and intra-racial slurs, Huntley finds himself at the corner of pop singer Taylor Swift and a hit record. That means he’s learned to just “Shake It Off.”