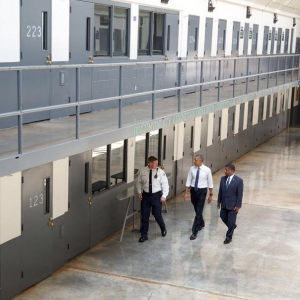 According to the committee’s website, “The bill narrows the scope of mandatory minimum prison sentences to focus on the most serious drug offenders and violent criminals. … [It] also reduces certain mandatory minimums, providing judges with greater discretion when determining appropriate sentences, and preserves cooperation incentives to aid law enforcement in tracking down kingpins.”

At a news conference, Sen. Dick Durbin, D-Ill., said senators believe “there are people who are incarcerated today, for lengthy sentences at great expense, who frankly should not be in those prisons.” He said his ability to come together with his colleagues and address the issue represents “the best of Congress, when people who disagree fundamentally can sit down, identify a goal, and reach it together.”

The senators noted that their group included lawmakers on the “far right,” including Sen. Mike Lee, R-Utah, and Sen. Tim Scott, R-S.C., as well as many on the left such as Sen. Patrick Leahy, D-VT, and Sen. Sheldon Whitehouse, D-R.I.

Criminal justice reform advocates on the left and the right praised Thursday’s announcement, even as they expressed concerns about the legislation.

“The bill offers many promising reforms that will reduce mass incarceration and its devastating effects on our country,” American Civil Liberties Union executive director Anthony Romero said in a statement. “We have deep concerns about other aspects, especially the expansion of some mandatory minimum sentences. We believe that punishments must fit the crime and that a cookie-cutter approach too often gets in the way of justice.”

Adam Bates, who works on criminal justice at the libertarian Cato Institute, called the bill “a good compromise” that “does more good than bad.” Asked what made the compromise possible politically, he said it’s complicated:

I would like to think the libertarian influence is increasing in both parties, and there’s more of an understanding even among traditionally conservative people that some of these prison sentences go overboard, that some punishments for non-violent offenders may be excessive, but I think there’s also a traditional conservative impetus here: there are far too many people in prison, and it costs an awful lot of money to house these people and take care of them.

One question moving forward is whether enough House conservatives will get on board with criminal justice reform. A bill on the subject has been introduced, but it has yet to pass the House Judiciary Committee.