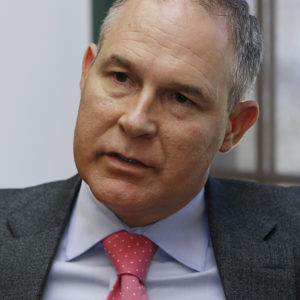 A total of 13 Senators from nine midwestern states, led by Chuck Grassley (R-Ia.) and Amy Klobuchar (D-Minn.), have issued a request to Environmental Protection Agency (EPA) Administrator Scott Pruitt to cease issuing financial “hardship waivers” to oil refineries struggling with the Renewable Fuel Standards (RFS) parameters, and are seeking disclosure of outstanding waivers that the EPA has been issuing.

A heated showdown has taken shape in D.C., as members of the Big Oil and Big Corn lobbies are vying for President Donald Trump’s support for their coalitions to either cap Renewable Identification Number (RIN) prices to help oil refineries, or to expand the sale of E15 year-round while keeping RIN prices set by the market. After news broke that the EPA was set to forgive approximately 250 million RIN credits from Philadelphia Energy Solutions (PES) oil refinery last month, worth nearly $350 million, rumors began circulating that PES was not the only refinery to receive RIN forgiveness for its financial hardship. The intent of the financial hardship waivers is to aid small refinery facilities that produce less than 75,000 barrels per day.

In a report from Reuters last week, an EPA source confirmed that the EPA has issued 25 waivers to refineries in the name of “financial hardship”over the last several months, and also confirmed that oil giants Exxon Mobil and Chevron Corp. are next to seek similar waivers. If granted, these waivers would exempt the companies from an obligation to either to meet the necessary ethanol blend requirements and/or paying for RINs to make up the deficit in production.

“These waivers fall well outside the bounds of the letter or spirit of this provision in the [RFS legislation],” the senators wrote in a letter, “which sought to provide flexibility for the smallest of U.S. refiners, and only in cases of genuine hardship. Worse, EPA’s actions are already hurting biofuel producers and farmers across the United States at a time when farm income is at the lowest levels since 2006 and retaliatory trade measures from China threaten to deepen the crisis.”

The senators expressed that in Pruitt’s confirmation hearing to the EPA, he said that the agency needs to act on the RFS in a way that furthers the objectives of the legislation. They also cited remarks Pruitt made in October 2017 in which he expressed his commitment to being “consistent with the text and spirit of the RFS.”

In addition to the immediate halting of waiver granting, the Senators requested a complete list of waivers granted between 2016 and 2018, a detailed report within two weeks that explains Pruitt’s decision to grant the waivers, and a written commitment to make the waiver granting process more transparent. Several senators from the group sent a previous letter in January asking for insight on the financial impact of RIN prices on oil refiners, to which Assistant Administrator William Wehrum told them that “all obligated parties, including merchant refiners, are generally able to recover the cost of the RINs they need for compliance with the RFS obligations through the cost of the gasoline and diesel fuel they produce. The agency also reiterated that it was not persuaded by arguments that merchant refiners are put at a distinct disadvantage when compared to integrated refiners.”

Actions by the senators come on the heels of Trump vocally supporting a proposal that would allow for the sale of E15 year-round, where it is currently only sold outside of the summer months, due to regulations stating that high summer heats and high ethanol volumes contribute to the formation of smog. Renewable fuel supporters have argued that high RIN prices can naturally be reduced by expanding E15 to year-round, increasing the number of RINs in supply. Oil supporters have called for capping of RIN prices in a compromise to expanding E15. Experts argue however that such a compromise would make blending inherently less valuable because of such low prices. As it currently stands, RFS supporters argue that the EPA’s actions have already resulted in decreased ethanol production and blending, which has resulted in less corn being purchased, negatively impacting Midwestern farmers.