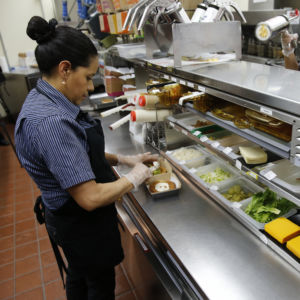 How the Service-Sector Can Help Launch Careers

The Path Forward Coalition dispels misperceptions about service-sector jobs and highlights how they can help workers launch fulfilling careers.

The National Retail Federation and the National Restaurant Association started the coalition to show that service-sector workplaces, like restaurants and retailers, hold many opportunities for those looking to enter the workforce and the gain foundational skills needed for lifelong careers.

The Path Forward Coalition brings together industry groups, employers, and public policy advocates to argue for the value of an entry-level service jobs as a stepping stone to a fruitful career.

Path Forward co-senior advisor Robert Doar has worked throughout his career to counter poverty, in the public sector and as a think tank scholar. There are several avenues through which people escape poverty, he notes, but none is more powerful than employment.

“I think the coalition is trying to promote the importance and great benefit of employment in the service-sector,” Doar said. “The Path Forward Coalition’s principal goal is to remind Americans of something they know already, which is employment in the service-sector offers a lot of opportunities for advancement and offers some people who are particularly struggling a start to get them over the poverty line.”

Doar oversaw a dozen public assistance programs while working as the commissioner of New York City’s Human Resources Administration under Mayor Michael Bloomberg. He then ventured on to the conservative American Enterprise Institute, where his research focuses on anti-poverty policies.

“There’s a lot that can be done and one has to do with government programs, but one big one has to do with employment,” Doar said. “You can’t ignore the fact that the service-sector is the largest, 30 million jobs is a lot of opportunities. So for me, being part of the Path Forward Coalition allows me to both stay connected and stay informed, and also to participate in promoting these opportunities.”

The coalition, he adds, also provides a platform to discuss the future of work, training, and skill acquisition. He also hopes the coalition will help change the misperceptions that plague service work.

“Sometimes there is, unfortunately, a sense from various parties that these opportunities, these are dead-end jobs,” Doar said. “I think that is wrong. I found that to be wrong in New York City, I found that to be wrong in 20 years of working in social services. So we’re both promoting these opportunities, and also reminding people that they are a step forward and a step up.”

Broderick Johnson, Doar’s co-senior advisor in the Coalition, has made the importance of employment a main focus throughout his career in public policy. His own experience working retail in Baltimore as a young man cultivated a passion for helping people find what they need to thrive in the workforce.

“Among the many exciting things about this coalition is the fact that it’s a bipartisan coalition, as evident by the fact that I’m the co-senior adviser of this coalition with Robert Doar,” Johnson said. “He’s on the Republican side, and I’m on the Democratic side, at least in terms of our party affiliations.”

Johnson has held senior positions with various congressional committees where he helped draft legislation like the Family and Medical Leave Act. Former President Barack Obama later appointed him chairman of the My Brother’s Keeper task force, which focused on closing the opportunity gaps young men of color face.

Young men of color tend to suffer most when the economy isn’t doing well, Johnson notes. He hopes that with greater opportunity to enter the workforce and build skills, they can launch careers that help them, their communities, and the country.

“The dire consequences of them not being able to have productive lives and opportunities to work and earn a living really leads, often times, to, not only them struggling in poverty, but also the impact it could have on their involvement in the criminal justice system,” Johnson said. “On the other hand we know when they get those opportunities, when they get jobs, when they get the first job, for example, or when they get a summer job, we know that can have a real impact, in a positive sense.”

The Path Forward Coalition approaches the problem in a few key ways. It works with employers to ensure newer workers have access to programs that help cultivate desired skills. Members have also written op-eds, spoken with lawmakers, and met with employers to reinforce the importance of these entry-level positions—and to ensure that those who need them are able to take advantage.