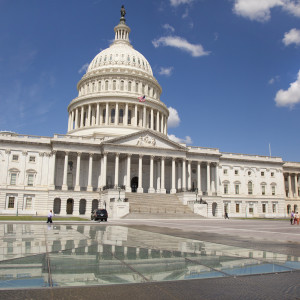 Sessions, Brat to GOP Lawmakers: Respect the Base on Immigration 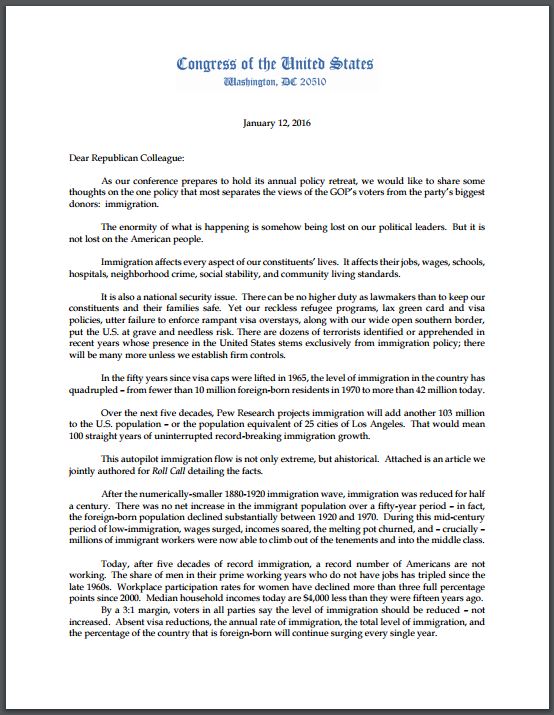 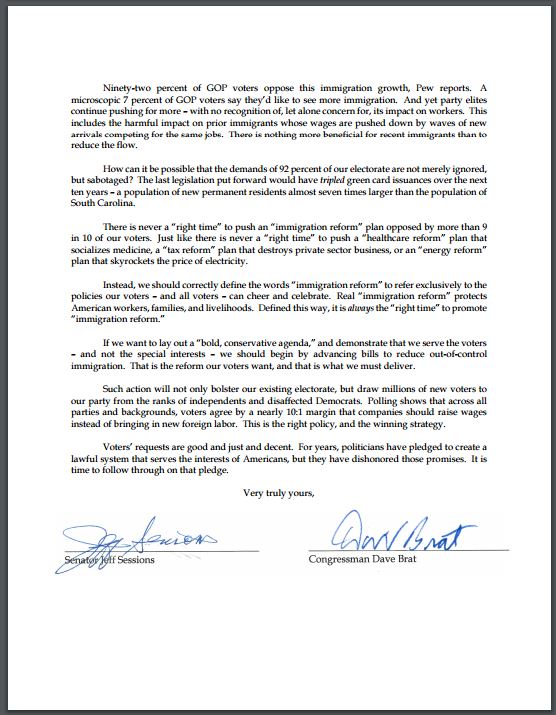 As GOP senators and representatives headed to Baltimore for a three-day retreat, the two immigration hardliners penned a letter telling colleagues that polls overwhelmingly show Republican voters want to see a net reduction in the number of immigrants, “yet party elites continue pushing for more.”

In Baltimore, the Republicans are scheduled to hear from author Jon Meacham, FitBit founder James Park and Francis Collins, the director of the National Institutes of Health.

Brat’s anti-amnesty position on immigration is often cited as the catalyst behind his upset GOP primary defeat of former House Majority Leader Eric Cantor in 2014, while Sessions has long argued the country’s influx of immigrants is holding down worker wages.

As our conference prepares to hold its annual policy retreat, we would like to share some thoughts on the one policy that most separates the views of the GOP’s voters from the party’s biggest donors: immigration.

The enormity of what is happening is somehow being lost on our political leaders.  But it is not lost on the American people.

It is also a national security issue.  There can be no higher duty as lawmakers than to keep our constituents and their families safe.  Yet our reckless refugee programs, lax green card and visa policies, utter failure to enforce rampant visa overstays, along with our wide open southern border, put the U.S. at grave and needless risk. There are dozens of terrorists identified or apprehended in recent years whose presence in the United States stems exclusively from immigration policy; there will be many more unless we establish firm controls.

In the fifty years since visa caps were lifted in 1965, the level of immigration in the country has quadrupled – from fewer than 10 million foreign-born residents in 1970 to more than 42 million today.

Over the next five decades, Pew Research projects immigration will add another 103 million to the U.S. population – or the population equivalent of 25 cities of Los Angeles.  That would mean 100 straight years of uninterrupted record-breaking immigration growth.

This autopilot immigration flow is not only extreme, but ahistorical.  Attached is an article we jointly authored for Roll Call detailing the facts.

After the numerically-smaller 1880-1920 immigration wave, immigration was reduced for half a century.  There was no net increase in the immigrant population over a fifty-year period – in fact, the foreign-born population declined substantially between 1920 and 1970.  During this mid-century period of low-immigration, wages surged, incomes soared, the melting pot churned, and – crucially – millions of immigrant workers were now able to climb out of the tenements and into the middle class.

Today, after five decades of record immigration, a record number of Americans are not working.  The share of men in their prime working years who do not have jobs has tripled since the late 1960s.  Workplace participation rates for women have declined more than three full percentage points since 2000.  Median household incomes today are $4,000 less than they were fifteen years ago.

Ninety-two percent of GOP voters oppose this immigration growth, Pew reports.  A microscopic 7 percent of GOP voters say they’d like to see more immigration.  And yet party elites continue pushing for more – with no recognition of, let alone concern for, its impact on workers.  This includes the harmful impact on prior immigrants whose wages are pushed down by waves of new arrivals competing for the same jobs.  There is nothing more beneficial for recent immigrants than to reduce the flow.

How can it be possible that the demands of 92 percent of our electorate are not merely ignored, but sabotaged?  The last legislation put forward would have tripled green card issuances over the next ten years – a population of new permanent residents almost seven times larger than the population of South Carolina.

If we want to lay out a ‘bold, conservative agenda,’ and demonstrate that we serve the voters – and not the special interests – we should begin by advancing bills to reduce out-of-control immigration.  That is the reform our voters want, and that is what we must deliver.

Such action will not only bolster our existing electorate, but draw millions of new voters to our party from the ranks of independents and disaffected Democrats.  Polling shows that across all parties and backgrounds, voters agree by a nearly 10:1 margin that companies should raise wages instead of bringing in new foreign labor.  This is the right policy, and the winning strategy.

Voters’ requests are good and just and decent.  For years, politicians have pledged to create a lawful system that serves the interests of Americans, but they have dishonored those promises.  It is time to follow through on that pledge.