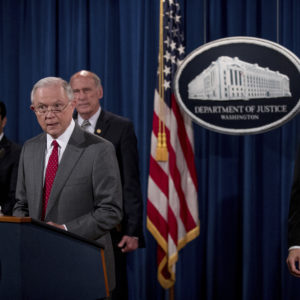 The U.S.’s top spy and law enforcement officials want Congress to permanently authorize Section 702 of the Foreign Intelligence Surveillance Act (FISA), an expiring law that allows the National Security Agency to conduct broad warrantless surveillance — including potentially millions of Americans — and has a history of compliance issues.

Attorney General Jeff Sessions and Director of National Intelligence (DNI) Dan Coats asked the leaders of both parties in the House and Senate to permanently reauthorize Section 702 of the 2008 FISA Amendments Act in a letter released Monday. Section 702 lets NSA warrantlessly surveil foreign nationals when they communicate with U.S. persons, a program that critics say sweeps up data on potentially tens of millions of Americans.

“Reauthorizing this critical authority is the top legislative priority of the Department of Justice and the intelligence community,” Sessions and Coats wrote to Speaker Paul Ryan and Minority Leader Nancy Pelosi in the House and Majority Leader Mitch McConnell and Minority Leader Chuck Schumer in the Senate.

It concludes by asking Congress to “ensure the speedy enactment of legislation reauthorizing [Section 702], without amendment beyond removing the sunset provision” to avoid future interruption.

The letter dated last week describes Section 702 as vital to collect “information about international terrorists, cyber actors, individuals and entities engaged in the proliferation of weapons of mass destruction and other important foreign intelligence targets” outside the U.S.

Section 702 lets NSA tap the physical infrastructure of internet service providers, like fiber connections, to intercept foreign emails, instant messages, and other communications belonging to foreign nationals as they exit and enter the U.S. According to NSA it also “incidentally” sweeps up the communications of Americans corresponding with, and until recently, merely even mentioning foreign targets. The law expires at the end of December unless Congress decides to renew it.

Renewal has been subjected to bipartisan scrutiny during hearings throughout the year, where Democratic Sens. Ron Wyden of Oregon and Al Franken of Minnesota blasted intelligence officials for repeatedly failing to produce an estimate of how many Americans are swept up in Section 702. Republican Sen. Rand Paul of Kentucky has raised similar concerns while Sen. Lindsey Graham of South Carolina has taken issue with Section 702 potentially being used for political targeting by surveiling government leaders in contact with foreign officials, like former National Security Adviser Michael Flynn had with Russian Ambassador Sergey Kislyak.

In their letter Sessions and Coats argue the program is subject to rigorous oversight from Congress and the Foreign Intelligence Surveillance Court (FISC), which oversees the intelligence community in secret. They reiterate Section 702 is not intentionally used to surveil Americans.

But both Congress and FISC have taken issue with those claims. Wyden recently suggested Section 702 could be used to target communications that are entirely domestic, and is pressing Coats to clarify how the law can be used (Wyden, in a similar vein, exposed former DNI James Clapper lied to Congress in 2013 when Wyden asked Clapper if NSA surveils Americans. Clapper answered no, months before former NSA contractor Edward Snowden leaked documents proving otherwise).

A declassified April opinion from the Foreign Intelligence Surveillance Court (FISC) highlighted compliance issues with Section 702, including a failure to disclose those issues.

The typically intel-friendly court, which approves the vast majority of surveillance requests, chastised the government for an “institutional lack of candor” on a “very serious Fourth Amendment issue.” One such opinion said NSA has engaged in “significant overcollectin . . . including the content of communications of non-target U.S. persons and persons in the U.S.”

That same month NSA suspended a practice known as “about” collection — when NSA sweeps up American emails and text messages exchanged with overseas users that simply mention search terms — like an email address belonging to a target — but isn’t to or from a target. Intelligence officials have testified to Congress they’re working on a solution to re-engage about collection.

“These intelligence agencies . . . they’re saying to them, collect doesn’t mean that we copied your communications, that we put it in the bucket, that we saved it in case we want to look at it,” he told The Intercept. “To them, collect means that they take it out of the bucket, and actually look at it and read it.”