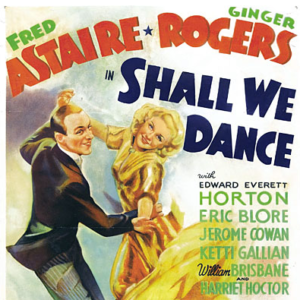 The Only Agreement Is to Disagree in Today’s Washington

Fred Astaire and Ginger Rogers made disagreements seem so polite back in the day. Try 1937 on the movie set:

Remember those lyrics from the celebrated movie musical “Shall We Dance.” Eighty years ago, Rogers and Astaire could sing and dance on roller skates — in a pleated skirt and a suit and tie, imagine that — so effortlessly. They were so cool even when they played lovebirds at odds. That was Hollywood.

So whom does the Washington news media treat more harshly, with more cynicism — a Republican White House or a Democratic White House?

First up, we hear from Jennifer Palmieri:

“It’s just a different metric that they apply to us, to Democrats, and I think they come after us harder on both being able to solve a problem, and then also on process and (palace) intrigue.”

Next up, we hear from Ari Fleischer:

“The press was soft on Obama. They were hard on the Clintons, and they are even harder on Donald Trump in my estimation.”

Remember, “you say to-may-to, I say to-mah-to. That’s called Washington, D.C. The pinnacle of polarization. Yes, woe is me.

Palmieri and Fleischer recently appeared for a discussion aptly titled “Communicating for the President” as part of a series of panels focusing on “The President and the Press: The First Amendment in the First 100 Days” at the Newseum in the nation’s capital.

—My guy bears the brunt of criticism from the news media.

—Oh, no, it’s my guy who is treated more harshly by the press corps.

In fact, Palmieri suggested that Democrats are held to a higher standard than Republicans because the former are collectively viewed as the voice of reason by the mainstream media. Said Palmieri, “This is where first it was really revealed to me. Gas prices were high, and it was during (Al) Gore and (George W.) Bush and the election. I said, ‘You know, if Bush were president, you guys wouldn’t be coming after him on gas prices.’ And they’re like well no, because he’s a Republican, he doesn’t think that he should weigh in to fix gas prices. But you are a Democrat, you’re supposed to follow problems.

“I was like, oh, OK, you’re a Democrat, you’re suppose to be better than this. I definitely found a different standard in covering Democrats and then covering Republicans.”

But Fleischer wasn’t convinced. Remember when, during the 2008 presidential campaign, “Saturday Night Live” performed the skit of reporters offering Obama pillows in mock genuflection. Classic media servility, it was labeled. A Charmin-soft landing, indeed, at least in television comedy. Some might say
that every comedic utterance contains at least a bit of truth.

“I don’t think that fundamentally changed in the eight years of the Obama coverage,” Fleischer said. “The press loved Barack Obama. They loved his story, as a candidate in 2008.”

Fleischer double-downed on his assertion, when he mentioned that at least 24 working journalists had joined Obama’s administration by the end of his first term — from Jay Carney, who left Time magazine, to Jim Sciutto, who at the time left ABC News, and now works for CNN.

Said Fleischer, “Time (magazine). Joe Klein: ‘Obama seems a political equivalent of a rainbow, a sudden preternatural event, inspiring awe and ecstasy.’ … Here is the Washington Post about President Obama’s vacation fitness program: ‘Between workouts showing his Hawaii vacation this week, he was photographed looking like the paradigm of a new kind of presidential fitness. … The sun glinted off chiseled pectorals sculpted during four weightlifting sessions each week. …’’’

Fleischer’s verbatim public recitals on the topic of media gushing in Obama’s favor charmed the 500 audience members, who reacted with hearty laughter.

Now, what about Hillary, as Palmieri related: “I mean the hatred that hangs around that woman is completely irrational, and I think it has beginnings in the decades before, and elements of it continue in her press coverage to this day.”

Two years before the onset of World War II, Astaire and Rogers sang, “Let’s Call the Whole Thing Off,” on the silver screen. In today’s lexicon, that means calling off any hope that either Republicans or Democrats would dare proclaim the opposition party was treated far worse than their own by the news media.