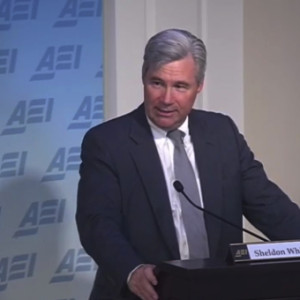 Sheldon Whitehouse Doesn’t Want to Throw Conservatives in Jail. He Just Wants Them to Back His Carbon Tax.

Alan Carlin wanted to make sure he wasn’t going to prison.

The retired Environmental Protection Agency analyst had come to Washington’s American Enterprise Institute Wednesday to hear a carbon tax proposal from Sen. Sheldon Whitehouse, D-R.I., and he was looking for clarification on one of the senator’s more provocative ideas: the notion of exploring federal legal action against those who “mislead the American people about the environmental harm caused by carbon pollution.”

“You have been quoted — I don’t know how accurately — that you think [climate science] skeptics should be sent to jail,” Carlin told Whitehouse during a question-and-answer session. “Since I am a very strong skeptic, I am much opposed to your—”

“Jailing you,” Whitehouse said with a smile. “Understood.”

The senator assured Carlin that he had no desire to incarcerate everyone who questions climate science, although he does want to consider suing fossil fuel companies for fraud if they deliberately spread misinformation on the issue.

Unfortunately for Whitehouse, whose appearance at the flagship conservative think tank was meant to be outreach to the right on climate change, this explanation managed to irritate other people in the room. A representative from the conservative R Street Institute stressed that he accepted mainstream climate science but felt as though Democratic rhetoric was counterproductive to bringing skeptics into the fold. AEI’s Benjamin Zycher was less delicate, calling Whitehouse’s musings about prosecutions “a long step toward a world of totalitarianism.”

All of this served to underscore an immense challenge facing the Rhode Island senator, who has made himself Democrats’ climate point man in the Senate. He believes bipartisanship is necessary to address the threat, but he and his allies have had little luck persuading conservatives to care about the issue. On Wednesday, Whitehouse touted Sen. Lindsey Graham, R-S.C., as an example of a Republican who is seeking solutions to climate change.

“This is an area that does demand conservative leadership,” said Sen. Brian Schatz, D-Hawaii, who joined Whitehouse at AEI. “And in the tradition of Margaret Thatcher and Barry Goldwater and many other conservative environmentalists, we need conservatives to embrace their own market-based solutions to our collective climate challenge.”

Whitehouse and Schatz said a carbon tax should be an appealing market-based fix, seeing as it’s “firmly grounded in core conservative economic principles — values like property rights, market efficiency and personal liberty,” according to Whitehouse.

Under the senators’ revenue-neutral plan, the carbon tax would fund a lowering of the corporate tax rate, which many conservatives say they support.

“The basic idea is simple: you levy a price on a thing you don’t want, carbon pollution, and you use the revenue to help with things you do want,” Whitehouse said.

But reaction to this plan at the AEI event was mixed at best.

Jerry Taylor, the president of the libertarian Niskanen Center, sounded receptive. He said, “If climate change represents a risk to life, liberty and property … it’s the government’s job to enjoin that damage against the life, liberty and property of its people. And that is a worthy and legitimate cause for conservatives and libertarians to embrace.”

Yet Zycher of AEI was decidedly unmoved. In addition to questioning the scientific assumptions underlying the senators’ proposal, he said their plan “would have trivial temperature effects.”