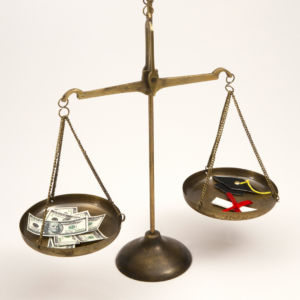 Colleges and universities should be reserving one out of every five seats for students from low-income backgrounds, according to the experts behind a report issued last week. Backers of the proposal argue that first-rate selective higher education institutions in particular have the large endowments and big yearly surpluses that would easily allow them to expand economic diversity in their lecture halls, should they choose to do so. Skeptics wonder whether the social, administrative, and financial costs are too high to make such an initiative work.

The report, titled “The 20% Solution,” was issued by Georgetown University’s Center on Education and the Workforce. The researchers cited studies that show how earning a college degree is among the surest paths to economic mobility in the United States, and they argued that lower representation of economically disadvantaged students in the upper echelons of the higher education system reinforces income inequality. The report also noted that bipartisan legislation was introduced during the last Congress that would have put a similar requirement on the vast majority of schools that accept students who participate in federal student aid programs.

According to the study, highly selective higher education institutions disproportionately admit fewer Pell Grant recipients. The worst offender cited in the report is Washington University in St. Louis, which enrolls less than seven percent of students who are Pell Grant eligible. Other top schools—large and small, public and private—including Yale University, Georgetown University, Oberlin College, and University of Virginia would fall short of the proposed 20 percent threshold. Top schools like Columbia University and University of California Berkeley, on the other hand, do a better job of enrolling higher percentages of Pell Grant recipients and would therefore be in compliance.

In total, if schools were required to adhere to the 20 percent solution, an additional 72,277 economically disadvantaged students would be required in schools nationally, including 42,823 in 163 of the nation’s top 346 most selective colleges. The researchers argue that there are students available waiting to fill those seats—about 150,000 Pell Grant recipients register sufficiently high scores each year to justify their admission in top schools, but only about 64,000 actually enroll, leaving 86,000 left over, according to the researchers.

One drawback of the proposal that was acknowledged by the researchers, is that an economic diversity mandate would likely work at cross purposes with many of the affirmative action initiatives schools have in place. According to the researchers, 81 percent of well-qualified Pell Grant recipients who don’t attend selective colleges are white.

Sandy Baum is a senior fellow at the Urban Institute and is an expert on higher education access and financing. She expressed skepticism of the proposed Pell Grant quota in an interview with InsideSources, calling it an “overly simplistic approach” to “a very complicated problem.”

While she agrees that some elite universities with large yearly surpluses and multi-billion dollar endowments might be able to make the change easily, other smaller regional schools could face obstacles in recruiting the students necessary to fill the seat requirements. Once enrolled, the higher financial aid needs and auxiliary costs associated with those students would force the higher education institutions to make difficult resource allocation decisions, Baum argued. She also worried that the system could benefit low-income students at the expense of students from middle-income families.

Baum did say that she would be open to a more flexible system that would create an incentive structure for higher education institutions to graduate more students from low-income backgrounds, but she does not believe a one-size-fits all federal mandate would be the best avenue to pursue. In general, Baum argued that more emphasis should be directed to the front-end: giving the Pell Grant eligible students the support to seek out and apply to top schools in the first place.

Baum also said that schools should focus on both racial and socio-economic diversity. While the two priorities are not mutually exclusive, both warrant special attention, she said.

Another possible solution Baum mentioned, which is also cited in the report, is thinking about discouraging higher education institutions from offering non-need based financial incentives. Many schools offer merit scholarships or other tuition breaks to students from affluent families (either because of parental legacy, exceptional academic achievement, or other reasons), while lower-income students are stuck taking out loans. Those resources might reasonably be put to better use helping economically-disadvantaged students, argued Baum and the Georgetown study’s authors.

Problems associated with rising higher education costs are an international trend, but as with other solutions proffered to address the larger problem, easy answers that a broad coalition of experts can get behind appear to remain elusive.