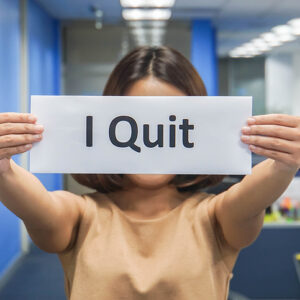 Shove This Job Is the Theme of the Great Labor Reshuffle

Millions of Americans appear to be echoing the words of the Johnny Paycheck song “Take This Job and Shove It.” This is a sentiment that is changing the work scene, the way we work, and the future of work.

The workers of America are shuffling the deck in a way that has never happened before. It is accentuating an acute labor shortage.

I receive lists of job openings every day and the common denominator seems to be that you must show up at a place of business. Among the big and seemingly frantic employers are FedEx, Walmart, and Amazon. Warehouse workers and delivery drivers are the most sought-after employees.

To overcome the labor shortage, wages are rising and adding to the rising inflation — although what part of that rise is labor cost isn’t clear. Other factors are pandemic-induced supply chain disruptions, a tightening of food flow from California and other Western states, and the acute housing shortage. The economy is rebalancing; and so are workers, reassessing their lives and making changes.

There has been a severe shortage of skilled workers for a long time. It has been felt almost everywhere from construction to electric line workers. It is just worse now, exacerbated by immigration restrictions and workers who have joined the reshuffle.

During the lockdown, millions of individuals have assessed what they do and, apparently, found it wanting.

America’s workforce isn’t returning to the jobs that they held before the lockdown. Some are trying new things; others are demanding changes in the workplace. There is a demand for more remote working. The rat race is running short of willing rats.

Commuting seems to be the one big no-no. People in the major work hubs like New York, Washington, Chicago, and San Francisco have sampled the joys and the failings of working from home, and commuting has lost.

I know people who used to spend four or five hours every day getting to work and back home in all these cities. Sitting in a traffic jam is neither creative nor the best use of human life, these people are now saying.

In the movie “Network,” Peter Finch bellows, “I’m as mad as hell, and I’m not going to take this anymore!” That is the new sentiment towards rigid travel and rigid work schedules. Working from home has taken people up the hill and shown them the valley, and they have liked the valley.

Other workers, particularly at the lower end of the work scale, have wondered whether they wouldn’t be happier doing something else now that they have had time to ponder. A friend of mine’s daughter who was a professional waiter in Florida now works for a printer. She has found she gets a more dependable income, better hours, and that incalculable: a happier work environment.

I love small business, and I believe it to be the essential force for innovation and job creation. But it is also where petty boss-tyrants flourish. Lousy, egomaniacal employers aren’t hard to find, especially in the restaurant business.

When I worked as a waiter in New York, between journalism jobs, I knew waiters who dreamed of the great restaurant where the tips are generous and, above all, the “patron is nice.” Unseen, there is a lot of cussing and pressure in any restaurant and job security is unknown.

Enforced downtime has caused many to wonder whether they are even in the right line of work; whether the money, prestige, or social recognition that may have gone with their old job was worth it.

For others, the gig economy has beckoned, where the employer has been cut out. Particularly, this is true of young people in communications and related work. Geeks are a hot item and can contract directly. But others, from landscape gardeners to plumbers, are going gig. The downside is there are no benefits, from Social Security deductions to pensions and health care. Society is lagging in recognizing this new arena of work.

Peculiarly, we aren’t at full employment. Unemployment is hovering around 5.9 percent and has gone up slightly as the summer has progressed. This raises the question of how many of the formerly employed are now in the gig economy, skewing the figures.

We are in what is, in effect, a post-war recovery. Traditionally, that is a time for social readjustment, for old bonds to be loosed, and for new energy to be released. Is it time to sack the boss?