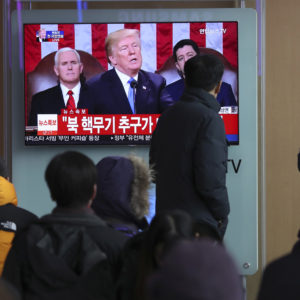 A Showdown With North Korea

The U.S. is pursuing a hardline policy toward North Korea regardless of the goodwill generated by the PyeongChang Winter Olympics and hopes in Seoul for rapprochement and dialogue with North Korea.

President Donald trump made U.S. policy crystal clear in a strongly worded denunciation of the North Korean regime near the end of his State of the Union message in Washington. It was as though he was deliberately saving North Korea for the dramatic, climactic end of a wide-ranging speech in which he declared “our new American moment” in which “together we can achieve absolutely anything.”

Trump clearly did not mean, however, that Americans could expect rapprochement with North Korea. That was obvious when he declared, “No regime has oppressed its citizens more brutally than North Korea” and called for “an extreme maximum pressure” to get the North to abandon its missile and nuclear program.”

His tough tone indicated that he was sticking to the option of a pre-emptive strike on the North even though he did not specifically reiterate that threat in his speech before both houses of the American Congress, members of his Cabinet and the Supreme Court, chiefs of the armed forces and other high-ranking officials.

As a concession to South Korean President Moon Jae-in’s desire to avoid angry exchanges with the North before and during the Games, Trump made no mention of the Olympics or of the U.S.-Korean alliance, which North Korea is trying to undermine by sending a large delegation of officials, cheerleaders, performers and athletes to the Games.

Trump signaled his hardline policy earlier in the day when White House sources let it be known Victor Cha, a distinguished professor at Georgetown who served in the presidency of George W. Bush as adviser on Korean affairs, would not be named as the U.S. ambassador to South Korea.

Cha appeared to have lost out as a result of opposing a preemptive strike on North Korea’s nuclear and missile facilities and scoffing at giving the North “a bloody nose.”

Within hours after word that he had lost out on going to Seoul as U.S. ambassador, an article by Cha in the Washington Post denounced suggestions for a pre-emptive strike.

“North Korea, if not stopped, will build an arsenal with multiple nuclear missiles meant to threaten the U.S. homeland and blackmail us into abandoning our allies in Asia,” Cha wrote. “These are real and unprecedented threats. But the answer is not, as some Trump administration officials have suggested, a preventive military strike.”

Cha argued that a strike, “even a large one, would only delay North Korea’s missile-building and nuclear programs.” Rather than “stem the threat of proliferation,” he wrote, it would “exacerbate it” – and motivate the North to “into a vengeful effort intended to equip other bad actors against us.”

Trump in his speech also spoke out on another area in which Cha has expressed disagreement with his team by warning against disrupting KORUS, the U.S.-Korea Free Trade Agreement. Trump insisted, however, that America has turned its back on decades of unfair trade deals.”

From now on, said Trump, “We expect trading relationships to be fair and very importantly reciprocal.” While America’s huge deficit with China ranks as by far the highest, Trump also has called for tough talks on KORUS with which Cha was clearly not on board.

Trump’s attack on North Korea did not reach the heights of his United Nations talk several months ago in which he threatened the North with “fire and fury.” However, it was still likely to provoke a harsh response from Pyongyang.

But is Trump really ready to risk a war with the North? Many analysts believe a second Korean War is still not likely at this time despite rhetorical blasts from North Korean leader Kim Jong-un.

The real test, though, will come after the Olympics and Paralympics when the U.S. and South Korea stage annual war games in the face of escalating threats from the North. The U.S. has already flown B52 and B2 bombers and B1 Stealth planes to Andersen Air Base on Guam while at least two aircraft carriers are on their way to join the exercises.

Trump warned against nuclear threats against the U.S. while also showing the cruelty of North Korea’s dictatorship by inviting one victim of the regime and the parents of another victim.

During his speech he introduced Ji Sung-ho, who lost a leg and an arm when a train ran over him as he was sleeping on a railroad track in North Korea during an attempt to escape. While Ji held up the crutch on which he had leaned while hiding out in China, Trump said his case was “testament to the yearning of a very human soul to live in freedom.”

He also introduced the parents of Otto Warmbier, the University of Virginia student who was sentenced to 15 years in prison in North Korea for a prank on the last day of a visit to Pyongyang. Warmbier’s mother wept as Trump denounced his captors for torturing him and then sending him home unconscious several days before he died.

“You are a powerful witness to a menace that threatens our world,” he said. “We pledge to honor Otto’s memory with total American resolve.” Those were strong words signaling a showdown with North Korea after the display at the Olympics.