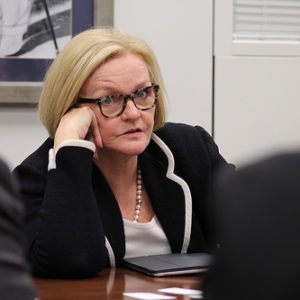 As U.S. Senator Claire McCaskill, D-Mo., faces a difficult reelection fight, one of her top issues in the past year has become the opioid epidemic plaguing the country. Last March, McCaskill launched a probe investigating the financial ties between the nation’s top opioid manufacturers and non-profit organizations, in an effort identify if doctors and organizations were being paid to promote certain opioid drugs as treatment for pain management. After the announcement, InsideSources exposed McCaskill’s failure to pursue an investigation of Mallinckrodt, the pharmaceutical company with the highest annual opioid prescriptions, which also happens to be based in McCaskill’s home state of Missouri. McCaskill later expanded the probe to include Mallinckrodt.

McCaskill’s efforts have not gone unnoticed. Simmons Hanly Conroy, a leading law firm that’s filing lawsuits against opioid manufacturers, distributors, and other organizations associated with the medication, has become one of the top donors to McCaskill’s reelection effort. The firm took little notice of the senator earlier in her career but has donated $219,300 to her campaign so far this cycle.

McCaskill, the ranking Democrat on the Senate Homeland Security and Governmental Affairs Committee, has made the opioid epidemic a focus of her work in the Senate. Earlier this month, McCaskill released the findings of the report examining non-profit payments, in which approximately $9 million was donated, between 2012 and 2017, to patient advocacy groups and other nonprofits that have promoted the use of opioids for pain management. Many of these groups have argued that they have changed their practices as opioid addiction has become a crisis.

Simmons Hanly Conroy is likely to benefit from the release of McCaskill’s report. According to reporting from the Center for Public Integrity and the Associated Press: “The findings [of the report] could bolster hundreds of lawsuits that are aimed at holding opioid drugmakers responsible for helping fuel an epidemic blamed for the deaths of more than 340,000 Americans since 2000.”