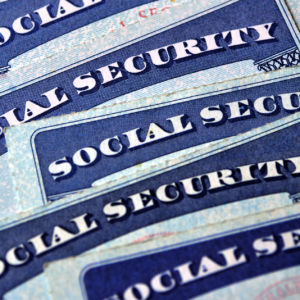 According to news reports, the government is killing more than 600 people a month. Is the government a serial killer? Who is doing all this killing and how can this be? I became one of their victims when I received notification from the government of my death and the cancellation of all benefits. I could not believe I was dead.

I know I cannot ask someone if they see me. That won’t work as they may be able to see dead people, as in the Bruce Willis movie “The Sixth Sense.” I thought about standing on a highway to see if a car can pass through me; but if I was really alive, I might become really dead! I tried a little easier test to walk slowly through a closed door; that didn’t work, but I now have a headache!

Maybe I should go to my doctor for a complete physical. Wait a minute, I’m looking in a mirror, and see my image; I am alive. But, how can I be dead and alive at the same time? It turns out, when the government say’s you’re dead, from a practical standpoint, you’re dead.

How was I killed? It’s the Social Security Administration improperly killing off people. When the problem is discovered, the government must “Resurrect” (heh; that’s what the government calls it) those people to make them alive again.

Obviously, you are bureaucratically killed.

As strange as it may sound, being declared dead might have some upside, assuming you’re not getting any financial help from the government. It is great if you have a large insurance policy. You certainly don’t have to pay income tax, bills, traffic tickets or fines. Play your radio as loud as you want, run around nude outside. You can’t be convicted of a crime; dead people don’t commit crimes. Even so, it might be nice to attend your own funeral, see who really liked you and be at the reception, hmmm, “Wonder what kind of food they’re having and can the selections be changed?”

The downsides, you can’t vote or run for political office; not sure that’s a downside. You are going to have a problem trying to book a vacation or flight, who wants to sit next to a dead person.

The government is the real winner when they declare you dead, no IRS refunds, “We don’t send money to dead people” they told me.

Further, the government will cut off any other payments you might be getting; but will just keep the money, interest free. The banks will close your credit card accounts, and your health insurance will be canceled since there is not much they can do for you health wise!

The problem usually begins with a simple keystroke error at the Social Security Administration. They will say, “You just slipped through the cracks,” while you reply, “A crack to you, the Grand Canyon to me.”

Federal and local government agencies along with companies rely upon the Social Security’s “Social Security Death Index.” Their records end up in many places, so it’s not just a matter of being able to get alive in the government system.

How do you fix the problem? Proving you’re alive is not just calling the Social Security administration and telling them you’re alive. In government-speak, the Social Security states, “An erroneous death record can be removed only when it is presented with proof that the original record was entered in error. The original error must be documented, and the deletion must be approved by a supervisor after pertinent facts supporting reinstatement are available in the system.”

If someone at Social Security says it’s fixed, it’s not! Now if you’re lucky, you’ll have a hearing to prove you’re alive. According to the Social Security Administration, the average processing time to become “resurrected” is 483 days. If you must appeal the ruling, tack on an additional 203 days. The genie won’t go back into the bottle.

There is an easier way to fix the problem, and it seems to work, since the administration doesn’t like bad publicity. Call your local news station and tell them the government has killed you, and can they fix it. The process will only take days, after the TV station contacts the Social Security office.

Unfortunately, it only fixes a very small portion of the monster they created. When this matter finally gets resolved, you need the government to provide you with a document stating you’re alive and your death within their database was in error.

You should also receive a document stating which government databases have been corrected and, which haven’t. You then need to send out a series of certified letters with a return receipt request, explaining the government registered you in their death database in error, along with a copy of their “Alive” certification. These should go to the three-credit bureaus, your credit cards, banks, insurance and loan companies and any other organizations that might have a direct and immediate impact upon your life.

However, beware of the “Survivor Scam!” Crooks use the Social Security death notice documents to target survivors. You may be contacted by companies informing you your departed owes them money. They will be trying to prey on the loss of a loved one to clear their name of debts. Don’t fall for it; the trash can is the best place to store the letter.

Make sure you carry a mirror around, you don’t want a surprise!