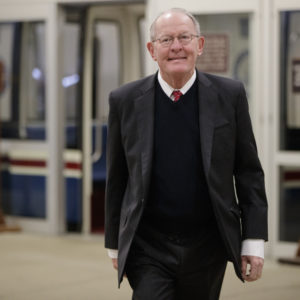 ‘Skinny Budget’ Too Thin for Some State Ed Chiefs

The bottom line was brought up repeatedly as state education officials descended on Capitol Hill to meet with federal lawmakers on Tuesday. The president’s proposed “skinny budget” calls for a 13 percent cut to the Department of Education, including billions of dollars that go to states in large grant packages.

Dozens of top state education officials are in Washington, D.C. this week as the Chief Council of State School Officers (CCSSO) holds its yearly legislative conference. Though each state’s system varies, regional education leaders tend to have major sway over what happens in their local school districts. Congress passed the Every Student Succeeds Act (ESSA) in 2015, further empowering states to choose their own educational priorities—a shift that Congressional Republicans solidified last month by repealing Obama-era ESSA accountability regulations.

After successfully checking off some big-ticket reform items on their agenda in recent years, the state chiefs’ immediate attention has largely turned to making sure their budgets are protected. The federal government only contributes about 10 percent to the average local school district’s budget, but those federal funds are often targeted to specific initiatives, like supporting students from low-income families, those with disabilities, and teacher professional development.

A blueprint of the president’s proposed budget, called a “skinny budget,” would imperil some of those initiatives (such as teacher training grants and some after-school programs) and does not fully fund others (such as IDEA protections for students with disabilities). The administration is also calling for some increases to programs that expand school choice. If Congress decides to make cuts along the President’s proposal, state chiefs will either have to go to their state treasuries to make up the difference, or cut services.

The IDEA grant program is a particularly sore spot for local education leaders. The cost of giving each student with special needs an Individual Education Program, or IEP, as the statute requires, costs tens of billions each year nationally. While the government is supposed to pay for 40 percent of the cost incurred by the protections, actual appropriations have historically covered closer to 17 percent of the costs. And, while the President’s budget doesn’t cut IDEA funding, it doesn’t increase it either.

During a brief question and answer session following his remarks to the assembled state chiefs in the Dirksen Senate Office building, Sen. Lamar Alexander, R-Tenn., the chair of the upper-chamber’s education committee, sympathized with the state officials’ plight when asked if he would fight to fully fund special education.

“We’ll do our best,” promised the senator on working with the appropriations committees to fund the IDEA program.

From a wider perspective, the CCSSO, which coordinates the state chiefs’ federal lobbying efforts, has a narrow political path to walk. In working to represent the interests of officials from across the ideological spectrum, advocates like Chris Minnich, the CCSSO’s executive director, need to be strategic when engaging with lawmakers and congressional staff.

Minnich described the President’s budget as a point that “we can start from.” He expressed optimism that the state chiefs and conservative budget hawks in the majority should be able to find common ground on prioritizing federal funding for the programs that have the biggest impact on students. Nevertheless, Minnich seemed to express concern at the calls to “zero out” some big grant programs, like the billions that are appropriated for teacher training under ESSA’s Title II.

Tony Evers, Wisconsin’s Superintendent of Public Instruction and the former CCSSO president, was more outspoken in his assessment of the president’s skinny budget.

“It’s an extraordinarily bad budget for education,” he told InsideSources in a break between Congressional speakers. Even if Congress were to step in to protect some of the programs, Evers questioned the signals the budget proposal was sending about the new administration’s educational priorities.

The state chief also shrugged off the partisan battle from earlier this month over repealing the Obama-era ESSA accountability regulations. Evers said that the repeal under the Congressional Review Act “wasn’t earth-shattering” for his work, and that as expected when ESSA first passed, he feels he has “more flexibility” in working to craft a state accountability compliance plan.

Feelings were stronger among the federal lawmakers addressing the state chiefs, however. Rep. Bobby Scott, D-Va., the ranking member of the House’s education committee, gently chided the CCSSO for staying out of the ESSA accountability regulations repeal battle.

Scott told the chiefs that the freedom they enjoy under ESSA “is a two-way street,” as he urged the officials to maintain a “laser-like focus on equity and educational opportunity” for all students.

For his part, Alexander had said previously that he “regretted” the breakdown in bipartisanship over the ESSA accountability regulations repeal, while still defending the use of the Congressional Review Act to make the policy change.

Time will tell if top lawmakers in Congress, like Scott and Alexander, can rediscover bipartisan areas of compromise to satisfy the state chiefs’ calls for fully-funded educational support from Washington.