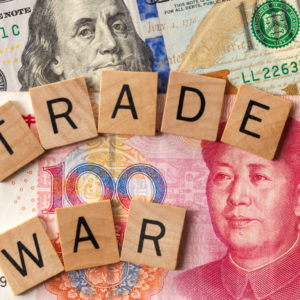 Sleepwalking Toward a World Trade War

All the signs are pointing to the Trump administration sleepwalking toward a global trade war.

It is not simply that the United States is now regarding China, the world’s second largest economy, more as a strategic geopolitical threat rather than as a potentially cooperative trade partner. Nor is it simply that the president has reacted to General Motors’ recent announced plant closures by threatening to impose punitive import tariffs on European and Japanese cars.

Rather, and more important, it is that the Trump administration’s macroeconomic policies are almost certain to result in a continued widening of the U.S. trade deficit. That is bound to lead to a further hollowing out of the U.S. manufacturing base, which risks drawing the administration’s preferred response of yet higher U.S. import tariffs.

One clear sign of the administration’s march toward a world trade war is the Trump administration’s stepped-up rhetoric against China. As if to underline this point, in an important speech last month, Vice President Mike Pence delivered a broadside against China’s predatory trade practices, its military aggression, and its meddling in the U.S. electoral process.

To be sure, at last weekend’s G-20 Meeting in Buenos Aires,  a temporary truce was reached between the United States and China not to increase tariffs for the next three months pending further negotiations. However, absent specific concessions by the Chinese to date, it is all too likely that in March 2019 the United States will again increase tariffs on Chinese imports.

Needless to add, if recent experience is any guide, China will almost certainly respond in kind as it has done in the past to any intensification in U.S. protection. That in turn could lead to another tit-for-tat U.S. policy response.

Another disturbing sign on the trade front was Trump’s knee-jerk reaction to GM’s recent announcement that it was planning to close five of its plants that would involve the loss of 14,000 U.S. manufacturing jobs. He reminded us that his previously floated idea of raising import tariffs on European and Japanese automobiles was very much on the table. Once again, if the president were to go down that path, we must expect retaliation in kind from Europe and Japan.

An even more disturbing sign that the trade war is all too likely to intensify is the fact that, far from narrowing as Trump has repeatedly promised his electorate that it would, the U.S. trade deficit is widening at an alarming rate. Indeed, in the two years since he took office, the U.S. trade deficit has steadily widened and is now running at a record annual rate of around $1 trillion.

The unwelcome widening in the trade deficit should have come as no surprise considering the very expansive stance of U.S. budget policy at this late stage in the U.S. economic cycle.

Not only has the large unfunded Trump tax cut together with increased public spending reduced U.S. public savings thereby setting up the conditions for the return of the twin budget and trade deficit problem of the 1980s. It has also put pressure on the Federal Reserve to raise interest rates. That in turn has propelled the dollar ever higher. The resulting 10 percent U.S. dollar appreciation since the start of this has seriously undermined U.S. international competitiveness. It has done so by more than the increase in U.S. import tariffs that has protected U.S. manufacturers from increased foreign competition.

Until the administration recognizes that there is a basic inconsistency between its deficit-busting budget policy and its fundamental policy objective of eliminating the U.S. trade deficit, we should brace ourselves for a further intensification of U.S. trade protection. That in turn is bound to lead us down the path of the beggar-my-neighbor policies of the 1930s. As any economic historian will tell you, that is the last thing that a fragile world economy now needs.