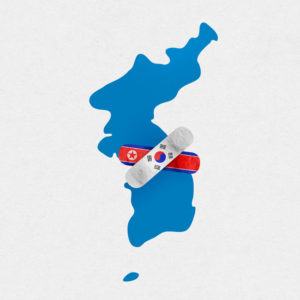 Slim (but Possible) Chance of Reconciliation on Korean Peninsula

One of the axioms of modern Korean history is that the future is hard if not impossible to predict. We’ve had so many surprises since the division of the Korean Peninsula by U.S. and Soviet diplomats in 1945 and the North’s invasion of the South nearly five years later that it would be impossible to list them all.

Not all unforeseen happenings have been bad. Nobody after the Korean War ended in 1953 would have dared predict the rise of South Korea as a major industrial power. Nor would anyone have imagined at the height of the presidencies of Park Chung-hee and then Chun Doo-hwan from May 1961 to 1988 that Korea would emerge as a real democracy.

All of which is by way of wondering what kinds of surprises to expect in 2020. No, I’m not blessed with 2020 vision. (Watch out, we’re gonna hear that pun more than once this year — maybe a few million times.) My lack of 2020 vision really does inhibit me from making wild forecasts about the future of North-South Korean relations, the U.S.-South Korean alliance and the outcome of attempts at getting the North to give up its nukes.

Am I saying there’s a chance Kim Jong-un might decide one day, enough is enough, I’ll go along with whatever the Americans have been asking, hand over all my nukes and blow up all the places where they’re made? All that’s not going to happen by the wildest stretch of anyone’s imagination, but there are reasons the North Koreans might go slow on test-firing long-range ballistic missiles or exploding nuclear warheads underground.

Here’s one big reason that we don’t know a lot about. In the North’s sixth and last nuclear test, in September 2017, the North Koreans purportedly blew up part of a mountain, killing at least 200 people, maybe more. The lesson here is, if you play with fire, you risk getting burned. OK, maybe Kim is thinking of ordering his seventh nuclear test after having suspended testing just to be nice to his pal Donald Trump. I wonder, however, if his scientists and engineers and technicians are at all ready to blow up another mountain. Bob Collins, who’s been studying and writing about North Korea as a soldier and senior civilian for the U.S. command in Seoul for decades, believes they might not be capable of fulfilling Kim’s “timetable.”

History, though, is full of surprises. Three of the hugest of 2018 and 2019 were the meetings between Trump and Kim. Could we be in for more surprises, more wild hopes, to be followed by more disappointment? Or could we be surprised finally by success for both Koreas and the United States? I’ve become so jaded, so disillusioned over the years by the false elation that accompanies every seeming step toward rapprochement and reconciliation that I must say the chances of getting anywhere are to me so remote as to be not worth considering.

It’s exactly at that stage in the great guessing game that we have to realize we could be wrong. Maybe we’ll see reconciliation, including routine traffic across the Demilitarized Zone, routine mail and telephone calls, routine commerce, routine tourist trips — all the stuff that goes on between neighboring states.

When I visited Berlin at the height of the Cold War, I had no trouble going from East to West. Watch what you say on the phone to the people on the other side, I was told, because someone is bound to be listening. Then, in 1991, the wall came down and Germany reunited.

Might we someday be surprised by Korean reunification? I can’t help but recall my first visit to Seoul in 1972 as Far East correspondent for the Chicago Tribune for what went down in the history of North-South relations as the “Red Cross talks,” that is, meetings staged by the Red Cross organizations of North and South Korea. The media of the world was on hand, and everyone was writing stories about the two Koreas finally getting along. They signed documents, posed for photo-ops, staged receptions ― the works.

We had no idea the worst was yet to come. North Korea at the time was already committed to a nuclear program that Kim’s grandfather, Kim Il-sung, was sure would enable his regime to stand up against any country on earth. It wasn’t until around 1990 that we awoke to the reality that North Korea was entering the nuclear age. More negotiations, more agreements — in 1991 the North-South agreement on denuclearization, then in 1994 the Geneva framework signed by the United States and North Korea for the North to stop making nukes at its Yongbyon complex.

The pathetic history shows that none of these agreements, before or later, worked out in the end. But who’s to say the next set of negotiations, the next agreement won’t be a success? At 100-to-1 odds, the gamble might be worth it. As for me, I’m putting the chances of success at about one in 1,000. But I’d love to be proven wrong.